Actor T.R. Knight on Grey’s Anatomy was spotted wearing a t-shirt with the phrase “We all have AIDS“. The t-shirts were created to try and stop the HIV/AIDS stigma for the 40 million men, women and children who have HIV/AIDS. The “We all have AIDS” t-shirts will be sold as limited editions at stores including Barney’s, Theory, Scoop, Louis of Boston and Kenneth Cole New York stores in the U.S., Holt Renfrew in Canada and Selfridges in London. 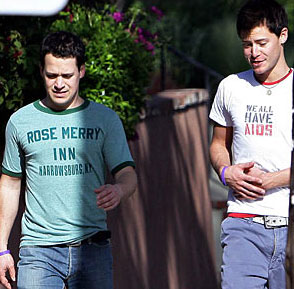 For more information visit WeAllHaveAids.com and check out more celebrity news at JustJared.com