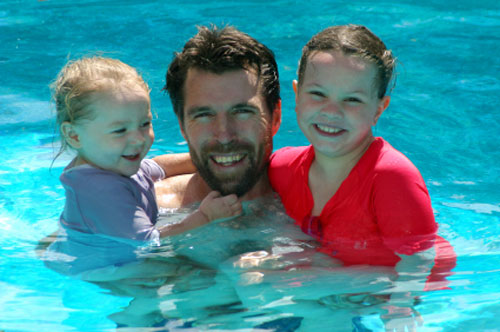 Many people are reluctant to wear clothing into a pool or take pains to rinse their clothing out immediately to avoid any damage from the pool chlorine. Many people also worry about their swimwear holding up to the chlorine in the pool.

Chlorine is added at low levels to pool water to keep bacteria from growing in the water. It is also added to drinking water for the same reason. In general, any water that comes into contact with the clothing, with the exception of ocean and lake water, will have chlorine in it. While chlorine does bleach and damage clothing over time, it is used in small enough amounts in a swimming pool that the effects won’t be seen for some time.

The standard amount of chlorine that is added to a pool is calculated in parts per million. The measurement for a pool will generally be around 1 to 10 parts of chlorine for every million parts of chlorine. When something is bleached in the washing machine with a clothing bleach, the general guideline is a bleach level in the washer that is a little more than 80 parts per million. This is a far faster way to bleach and damage clothing than exposing the clothing to chlorine bleach in a pool.

Because a pool does have higher levels of chlorine than household water, repeated exposure of clothing to pool water will result in damage and lighter clothing colors eventually. Rinsing out items of clothing after they have been in a pool will not remove the chlorine, but it will result in less chlorine in the clothing.

Because bathing suits take a lot of abuse in swimming pools, they are made of sturdy fabric that is made to resist some of the wear that bathers put it through. There are also a number of swimsuits on the market that are specifically made to resist the effects of chlorine. These chlorine-resistant suits are made to keep their color and thickness longer than regular swim suits.

These suits may also see the effects of chlorine eventually, but that damage will be slowed down. This can result in a suit that looks better for more than one or two seasons.