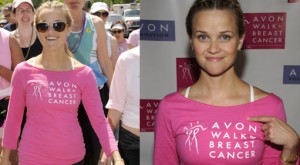 Breast Cancer walks have been an incredible way for organizations such as the Avon Foundation and Susan G. Komen to raise awareness and money for breast cancer research and education. Actress Reese Witherspoon was named the Honorary Chairman of the Avon Foundation and gave a speech at the walk’s closing ceremonies. As with most of the walkers Witherspoon was wearing the bright pink Avon Walk for Breast cancer T-Shirt.

The Avon Foundation is a 501(c)(3) public charity founded in 1955 with a mission to improve the lives of women and their families. Today that mission is brought to life through two key initiatives: the Avon Foundation Breast Cancer Crusade, which advances access to care and finding a cure, with a focus on the medically underserved; and the Speak Out Against Domestic Violence program which works to end the cycle of domestic violence, with a special focus on children.

Via: Ecorazzi and Bricks and Stones Gossip