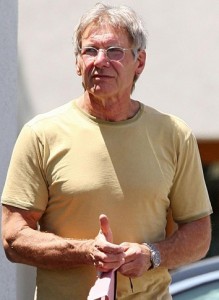 Sometimes a shirt is just a shirt. While t-shirts are incredible vehicles for expressing oneself sometimes people have nothing to say and wear blank t-shirts. Harrison Ford was spotted in L.A. wearing jeans and a blank light brown t-shirt.

The 65 year old Harrison was getting ready for the Cannes Film Festival for the unveiling of the potential blockbuster Indiana Jones and the Kingdom Of the Crystal Skull. It has been almost 20 years Harrison last played Jones in the The Last Crusade which debuted in 1989. Let’s hope it was worth the wait. Via Pacific Coast News Online