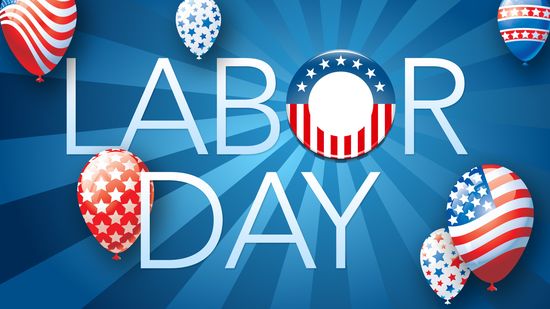 Labor Day is observed on the first Monday of September and has become known in the United States as the unofficially “official” end of summer. It’s a time that brings travelers home from summer vacations and to get the kids ready for another year in school.

The tradition to set one day aside each year to honor the state of labor and industry was first observed back in the late 1880’s. The idea was actually generated by a man named Peter McGuire, a president of the United Brotherhood of Carpenters and Joiners of America, in 1882. He felt that labor workers should have day in which everyone who benefited from such workers could recognize the strength and unity of labor and trade organizations. He also suggested a parade and picnics to follow such an observance. Why did he choose September 5th to honor the day? Simply because it fell about halfway between Independence Day, celebrated on July 4th, and Thanksgiving Day, celebrated during the later part of November.

The Central Labor Union adopted McGuire’s idea, and the first day Labor Day was first celebrated on September 5, 1882. New York City came alive with parades and speeches by various labor party and union members throughout the city. During the next couple of years, the idea of celebrating a Labor Day caught on in other states, and by 1894, the day had been made a legal holiday in thirty of them. Today, the holiday is celebrated and observed by every state in the Union. While many celebrate Labor Day as the last day of summer festivities, many keep the traditions of Labor Day alive by recognizing the efforts of laborers throughout the country. It’s a day during which attention can be drawn to the issue of worker’s rights and benefits, as well as improving the status of laborers everywhere throughout the world.

In 1954, an editorial in the Los Angeles Times stated, “Labor Day has become an integral part of the American way of life. It reflects a degree of optimism and mutual confidence on the part of all segments of society that few countries can equal.” The rights of workers and the decent payment of wages sets America apart from many other industrialized nations throughout the globe. Child labor laws in America prevent children from being trapped in lives of labor, denied a school education or other rights. Over the decades, American workers have fought for, and won, the right to equal pay for equal work, among both men and women employees.

While over the years, Labor Day has not only grown from an official day away from work, it’s celebrated as a day of family get-togethers, of trips to the beach and picnics in parks, where everyone, male or female can enjoy a day off work if they so choose.

New York City sees the largest parades and ceremonies, as hundreds of thousands of labor union employees and officials continue the legacy of Peter McGuire. The honor and respect paid to workers, no matter what their jobs, began as such a tiny seed in the mind of McGuire so many years ago. Now, not only hand laborers and carpenters enjoy the benefits of his dream, but also bankers, schoolteachers and craftsmen throughout America are able to recognize and reflect on the benefits of labor in our country. Worker’s rights and movements have made great strides in continuing American traditions of fair and decent living wages, and while Americans often complain that minimum wages aren’t enough to keep up with rising inflation and living costs, workers in America are protected against child labor, discrimination and unfair, cruel or even forced labor practices. For that, Americans need to spend a moment on Labor Day to remember and honor the efforts of Peter McGuire over a century ago as they enjoy a day free of work.

← Observing Maryland Day
How to Buy and Care for Nylons, Pantyhose, and Stockings →
Scroll Up