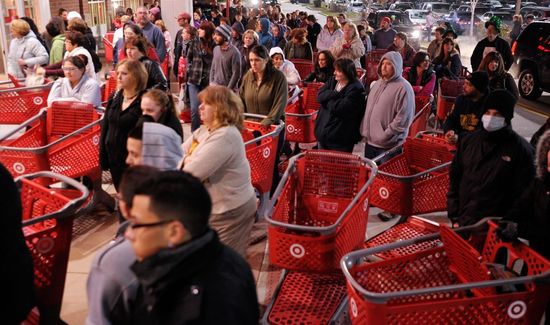 The name sounds like a horror movie title or an omen of impending doom, so what does it have to do with shopping? Well, Black Friday is the name given to the day after Thanksgiving; the day that opens the Christmas shopping season and also one that is traditionally known as having some of the greatest sales in the history of mankind, if you’re lucky to get up early enough and get inside your favorite department store to enjoy them.

Most retail stores open at (gulp) 5:00 a.m. on the day after Thanksgiving in an effort to get a jump on sales that other stores, who don’t open early enough, lose out on. Dedicated shoppers around the United States set their alarms and drag unwilling husbands or kids with them as they get in line before their favorite stores in the dark and wait patiently for those glass doors to slide open. Did you think that people would only line up around the block to see the latest and greatest movies? Try getting up early on the morning after Thanksgiving and you’ll be treated to an eye-opening surprise. Thousands of shoppers, decked out in coats and gloves, brave the cold, the wind, the rain, to get an early start on their Christmas shopping and the best sales of the year.

While this somewhat dubious tradition has been practiced for more decades than many would care to remember, the term ‘Black Friday’ was created in the 1970’s. In the 21st century however, the observation of the day has reached increasingly growing popularity and numbers of participants, perhaps due to the vagaries of inflation, or perhaps due to the trendiness of it all.

The term, Black Friday, has its origins in several factors, and depending on whether you’re speaking to a shopper or a storeowner, you may get different definitions. For retailers, Black Friday designates, as a news broadcast in 1982 stated, “Some merchants label the day after Thanksgiving Black Friday because business today can mean the difference between red ink and black on ledgers…” Others claim that the term refers to the massive amount of shoppers all vying for certain products and the resulting stress and strain makes shopping on such a day a not-so-pleasant experience. Store employees throughout America, who are the ones who must deal with demanding and impatient customers, have seconded that same emotion. However, because of the negative connotations associated with the term, ‘Black Friday’, many merchants throughout the United States have begun to try to rename the day, “Green Friday”, though such efforts have proven to be lukewarm at best. It appears as if the use of the term ‘Black’ in the day will continue for years to come.

Black Friday is usually looked forward to by a massive majority of women shoppers, who have had their eyes on certain items for the months leading up to the Christmas shopping season, and retailers play on such shoppers, often offering limited numbers of popular items to those who are lined up outside, all the while knowing that their supply won’t match demand. Still, once shoppers are inside their stores, they’re bound to purchase something rather than go home empty handed, which makes such schemes a win-win situation for themselves.

And while hundreds of thousands of bargain shoppers wait in lines for those special, one-day-a-year deals, family members that wait for their return at home scratch their heads and wonder what all the fuss is about. After all, everyone knows that the busiest shopping day of the year is the Saturday before Christmas.

← Showing Pride during Honor America Days!
How To Get Rid Of A Farmer’s Tan →
Scroll Up