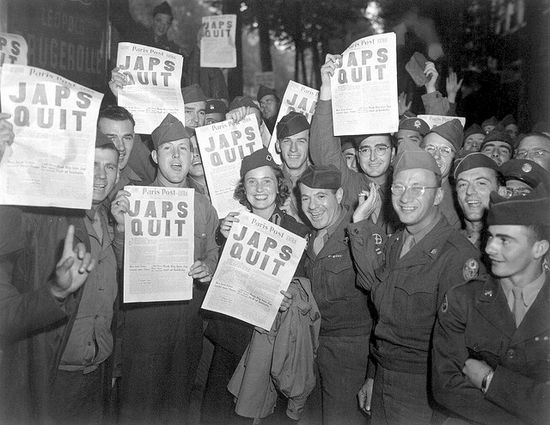 Victory Day is also known as V-J Day, which stands for Victory over Japan. The years during World War Two were some of the most trying for the United States, which was propelled into a global war after our country was attacked by Japanese forces on December 7th, 1941. The attack on Pearl Harbor brought America into a world war that was already ravishing Europe and parts of Asia. Hundreds of thousands of American soldiers were sent to fight in the European Theatre of War, while others were sent to fight in the Pacific.

The war in Europe came to an end in May of 1945, but the war continued in the Pacific Theatre of war until September of that year. V-J Day is the day that has been set aside ever since to celebrate the end of many years of battle with Japan. In early 1952, President Harry S. Truman designated September 2nd as V-J Day after Japan formally surrendered to Allies onboard the U.S. Missouri, an American battleship, in Tokyo Bay, Japan on September 1st.

Since then, the date has been observed, honored and celebrated by military personnel, organizations and civilians throughout the United States. While some people call the anniversary of the day V-J Day and others call it Victory Day, it is the same observation of the victory of the United States against hostile forces that attacked American soil so many years ago. The attack on Pearl Harbor, and the Second World War, will never be forgotten in the minds of Americans every where. Today, with surviving soldiers of the Second World War dwindling due to age and health concerns, it’s even more important for the history of the war to remain alive in the minds of generations to follow. During World War Two, the United States showed the world that strength of purpose and dedication to duty remained an American trait that has been carried down generation after generation following the American Revolution.

V-J Day celebrates the end to an awful era, an era that saw the deaths of millions of Americans and other soldiers and civilians around the world that died fighting for justice and democracy, and against evil, oppressive forces that sought to crush others beneath the onslaught of aggression. V-J Day is celebrated throughout the country with flag raisings, speeches and parades. On that day, Americans of all races, creeds and beliefs surged out into streets to celebrate the end of the long war.

The flag that flew over the Capitol on December 7th 1941 was the same flag that was flown over American General Douglas Macarthur’s headquarters in Tokyo in 1945 as Japan formally surrendered to foreign leadership for the first time in almost two thousand years. To this day, older Americans remember V-J Day especially, and veterans from around the country visit military ceremonies and events.. Children of all ages are taught about the events leading up to World War Two and of the sacrifices of what has been called ‘The Greatest Generation’ of American history. V-J Day is a day that will always be remembered in history books and in the minds of patriotic Americans, no matter where they live. Every September 2nd sees the American flag flying high over government buildings and private homes throughout the country. While the battles are over and the soldiers who fought them are fading away in the memory of later generations, it’s especially important for all Americans to remember V-J Day as a day that saw the result of years of struggle, sacrifice and bravery come to a welcome end. Today’s Americans are no strangers to war, but global war is something the United States has managed to avoid since the conclusion of hostilities in 1945. Today, the United States is on friendly terms with Japan, but nevertheless, Americans should always remember V-J Day, as part of the history of American fortitude, dedication and resilience.