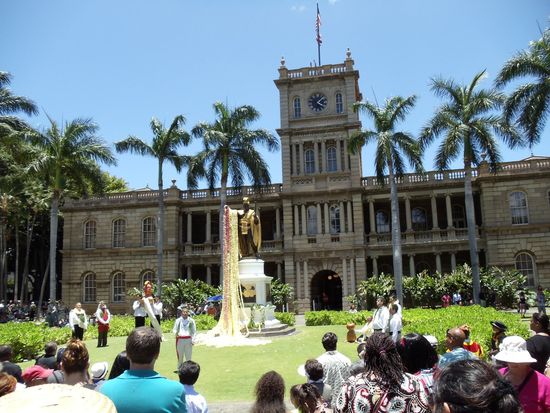 Sure, it’s a difficult word to wrap around your tongue, but the name of the Hawaiian king who did so much for what is today known as the State of Hawaii is one to be remembered. The birthday of one of Hawaii’s most beloved figures is celebrated every June 11th.

King Kamehameha (Ka-May-Ha-May-Ha) was the king who conquered the Hawaiian islands of Oahu, Maui and Kauai way back in the early 1800’s, uniting them with his kingdom, which he ruled from the big island of Hawaii. He was also big on reform and instituting customs that would honor Hawaiian ancestors and customs. He did away with a lot of superstitious rules and regulations, and may be one of the first rulers who actually tried to improve the lot and status of women on his islands. Not only that, but he welcomed and helped to arrange visits from early American missionaries as well as encouraged education among his people. Though he died before the first American missionaries arrived, he set a precedent that few other island kings or rulers did in welcoming foreign interests and education.

Kamehameha was known as a great ruler, and is believed to have fulfilled the Hawaiian prophecy of the legend of the birth of a male who would eventually become the greatest king Hawaii had ever known. He was born in the 1750’s in what is known as North Kohala. Because of the danger and threat he presented to current kings and rulers in Hawaii, he was spirited away and raised in a remote mountainous area until he became a teenager. His people in Kohala especially loved and revered him, and as he grew older, he conquered all the islands and united them under his leadership. He is known as Hawaii’s greatest warrior as well as statesman, who became known for his gentle spirit and his patience and kindness to all his people.

According to tradition, King Kamehameha was a giant of a man, one who commanded respect. Believe it or not, he owned a surfboard, which is reputed to be very large, as are his spears. A feather cape is still in existence today, which is too large for anyone under at least six foot five inches to wear without dragging on the ground.

To this day, King Kamehameha Day is celebrated on all the Hawaiian Islands with traditional ceremonies, parades and torchlight processions, but the celebrations observed in Honolulu are perhaps the most elaborate. On this day, exciting canoe, outrigger and surfboard and swimming races are held, attended by thousands of islanders and visitors from around the world who watch these traditional ceremonies with delight and awe. Of course, what would any Hawaiian celebration be without a traditional luau, or feast, complete with roasted pork, fish wrapped in leaves, traditional poi and other native delights such as coconut pudding? Ceremonial native dancers perform dances to the beat of drums and the flames of torchlight and bonfires.

A torchlight parade is often held, which a large man leads, standing in for King Kamehameha. He wears a large, yellow, feather robe and helmet and is surrounded by young men donned in feathers as well. Visitors will often discover that many other cultures also join in this parade, among them Chinese, Japanese and Korean organizations, all dressed in traditional costumes as well.

While celebrated mostly in Hawaii, King Kamehameha Day is known throughout the United States, and many mainland citizens opt to serve Hawaiian dishes for meals throughout the day in honor of the Hawaiian king. School children in Hawaii and around the mainland learn about this great leader on King Kamehameha Day, and create Hawaiian crafts and learn about the history of the great state of Hawaii. It’s a day to be remembered not only in Hawaii, but also throughout the country, a time to honor a great leader and icon of American generosity and spirit.