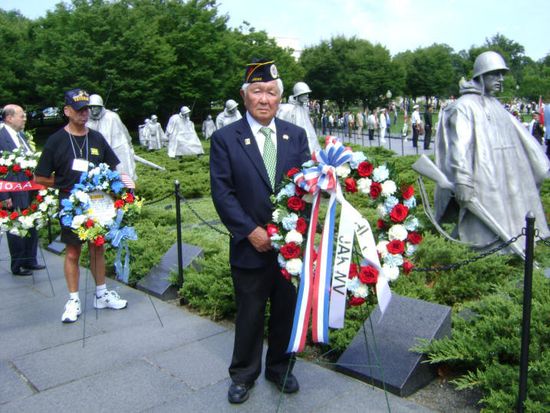 Throughout the decades following World War Two, the United States has been engaged in war with various countries for various reasons. The Korean War took place during the 1950’s and has been relegated to the distant memories of many Americans, to the degree that the Korean conflict is called ‘The Forgotten War’. Such a misnomer does a great disservice to the thousands of American men and women who fought, and lost their lives, in that war.

A civil war broke out between North and South Korean forces around the 38th parallel, the border between the two nations, in 1951. The United States sent troops over to Korea from 1951 to 1953. Shortly thereafter, President Harry S. Truman, with the full support of the United Nations Security Council, sent American forces to aid South Korea against the encroaching threat of communism. Eventually, America sent over five million soldiers to Korea, as did other nations. The war had killed nearly 200,000 soldiers from around the world, and those belonging to South Korea by the time it ended in 1953. Of that number, almost 40 thousand were Americans. Although an armistice signed in 1953 by the United States, China and North Korea, halted the fighting, South Korea refused to sign the document, and as a result, the two countries remain separated to this day, and the United States continues to maintain a military presence on military bases scattered throughout South Korea and along the 38th parallel. Because an official peace treaty was never signed, North Korea is still technically at war, not only with her former sister, South Korea, but the United States as well, with nearly 40,000 American soldiers performing yearly military service in that country.

The anniversary of the signing of the Military Armistice Agreement on July 27, 1953 is a cause for remembrance for all military and civilian personnel in the United States.  American soldiers have been engaged in warfare before and since the Korean conflict, but the battles, deeds and sacrifices of the soldiers who fought that war seem to be largely forgotten. The Korean War occurred immediately after the tragic and massive numbers of deaths of soldiers who had just returned from fighting in the Second World War and the drawn out conflict that began soon after in Vietnam, whose name now is synonymous with an unpopular war, protests and draft-dodgers. Regardless, the Korean War needs to be remembered by one and all, and not merely by those who participated in it.

Today, veterans in their 70’s and 80’s participate in military events, parades and memorial services every year on the anniversary of the signing of the Korean armistice, a time to reflect and remember fallen comrades and struggles. The Korean War is still remembered as a war that was fought at close range, without the capabilities of long distance warfare that are used today.

America stands strong behind South Korea and her people, who enjoy the benefits and freedoms of democracy. In the United States, the end of the Korean War is celebrated by mainly military groups and veterans, and flags fly from houses and businesses around the country. Washington D.C. officially recognizes the day every year, and the President of the United States urges all Americans to honor and recognize the sacrifices and loyalty of those who have served, and continue to serve, their military duty in South Korea. All government organizations, groups and institutions are requested to fly their flags at half-staff on July 27th of each year, in honor and remembrance of those who have fought for the continued principles of freedom and democracy in the Korean peninsula.