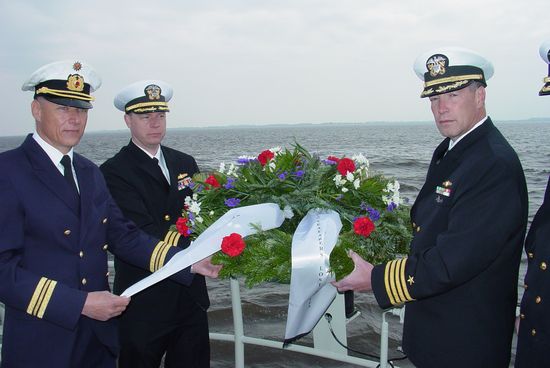 Every May 22nd, seafarers from around the nation pause to remember or celebrate the contributions, inventions, sacrifices and heroics of the men and women who sail the seas and waterways of the United States of America. Since the American Revolution, Americans have sailed the seas in pursuit of glory and adventure, and sometimes for the duty of war. Since 1933, this day has been set aside to recognize those people.

The Merchant Marine was one of America’s first naval groups, and their dedication and loyalty helped defend our young nation against British warships during the American Revolution.  In the Second World War, the Merchant Marine operated and coordinated the world’s largest sealift to date in the history of military warfare. Still, National Maritime Day doesn’t just honor the men and women who make their living on the seas, nor those who defend it. It’s also a day to honor the inventions and benefits of sea travel, transportation and those who work in jobs from offshore oil drilling to stewards of cruise ships.

Many organizations also use National Maritime Day to recognize and declare a Day of Remembrance and Prayer for Mariners and People of the Sea. Many industries today continue to reply on the open seas and great lakes and waterways of the nation, and many of the jobs held by those on the high seas are extremely dangerous and life threatening. National Maritime Day is a time to seek out those who perform such precarious duties and thank them for their courage and dedication. Unfortunately, National Maritime Day is not widely recognized in the United States, and there is no official federal holiday to commemorate the day.

National Maritime Day is also an occasion when the efforts and skills of the U.S. Army Corps of Engineers are recognized, as are the efforts and personnel of the American Association of Port Authorities. Members of these and other maritime groups take the opportunity to visit schools and attend civic events in small and large communities around the country, speaking of the history, and the jobs available to U.S. citizens within these fields, as well as to address issues of environmental protection, recreation and agriculture as it relates to lakes and rivers and oceans.

Maritime Day also recognizes and honors the United States Coast Guard, who serve to provide rescue and search missions in every part of American waters, and who have been credited for saving thousands of lives due to sea accidents and acts of war. The U.S. Coast Guard is also a major component of the United States Homeland Security Bureau and their protection of U.S. coastlines and waterways. Today, nearly five million jobs a year are available to those who work on any body of water, from ferry boat captains to those who work on cruise ships, research vessels and Coast Guard or Merchant Marine vessels.

Ceremonies and banquets are held throughout the United States on May 22nd, most especially in Washington D.C., and other major ports along the American seaboards. This day, boat parades can be found in almost every major city port, from New York Harbor to Los Angeles Harbor. The Merchant Marine, the Coast Guard and other maritime groups have been providing services since the birth of the American nation, and their efforts on the behalf of all Americans deserve to be recognized and honored. Many school classes visit local ports and piers on National Maritime Day and learn more about the many maritime groups that help to support and defend the United States against aggression, drug trafficking and other illegal activities. Since its inception prior to the American Revolution, the Merchant Marine has made its presence felt around the world, and continues to do so.