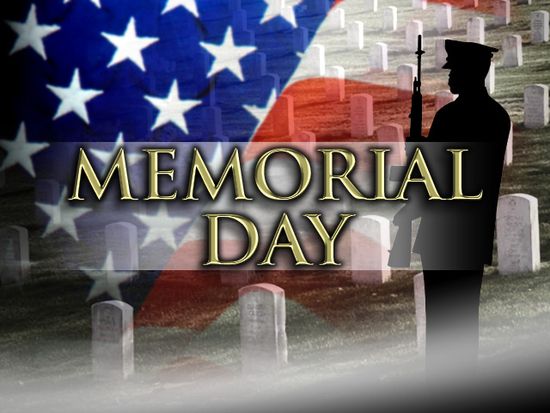 Remembering the men and women, soldiers and civilians, who have died while defending the United States has been a tradition in America since 1863, following the death of hundreds of thousands of soldiers during the War Between the States. Back then, the day of recognition was called Decoration Day, because flowers were placed on the graves of soldiers from both North and South. Started by women, some the wives of government representatives, others within local communities, the tradition became a yearly one.

The idea of recognizing a day to honor fallen soldiers is believed to have begun with a woman named Miss Emma Hunter of Pennsylvania, who appeared at her father’s tomb with flowers in 1864. There, she also met another woman bearing flowers to the grave of her son. The two women agreed to meet the same day the following year in order to again place flowers on their graves, and so Boalsburg, Pennsylvania, is credited with originating Memorial Day. Another legend tells of the creation of Memorial Day taking place as women from Columbus, Mississippi placed flowers upon the graves of both Confederate and Union soldiers in 1866.

In 1865, a suggestion was made to the Commander in Chief of the Grand Army of the Republic for citizens around the country to be able to have access to soldier’s graves on the last day of May for the purpose of “strewing with flowers or otherwise decorating the graves of comrades who died in defense of their country.” Shortly thereafter, ceremonies were held at Arlington National Cemetery in Virginia, directly across the Potomac River from Washington D.C., where they continue to this day. Though Memorial Day was not officially designated a national holiday until the late 1870’s, observers from towns and cities across the United States observed, recognized and honored veterans of all wars the last day in May. In 1873, New York was the first state in America to officially declare May 30th a legal holiday.

Navy personnel and families created small boats made of flowers and set them afloat at ports on both American coasts to that the tides would carry the flowers out to sea in the hopes that they would eventually find those who had been buried or lost at sea. Towns everywhere celebrate the day with red, white and blue streamers, parades, speeches and events designed to commemorate the sacrifices and loyalty of soldiers, both men and women, who have lost their lives in the continued pursuit of freedom and democracy. Flags, normally raised in front of all government and school buildings, are also raised in front of homes. Cemeteries around the country are decorated with thousands of little flags placed at the headstones of veterans. Military ceremonies performed throughout the country offer cannon and gun salutes to those who have given their all for their country. The playing of Taps in cemetery ceremonies around the nation brings tears to thousands of eyes every year, while white crosses decorated with red poppies or carnations remind all Americans that freedom is neither free nor to be taken for granted.

Schools around the country celebrate Memorial Day with crafts and classroom assignments that ensure that soldier’s contributions to freedom never be forgotten, and many veterans visit classrooms and auditoriums around the country, telling of their experiences during various battles and wars. The Pledge of Allegiance became a daily requirement for American children in schools around the country, serving as a reminder of what it means to be a citizen of one of the greatest countries in the world.

Memorial Day is one of America’s most honored holidays, when all military personnel are recognized and appreciated for their sacrifices and dedication to preserving the ideals of freedom and democracy not only within the United States of America, but around the globe.