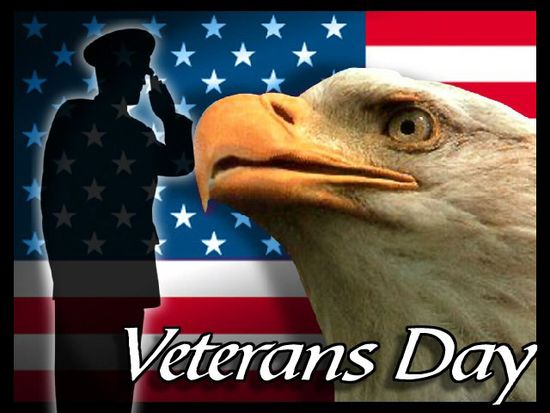 November 11th is a day set aside to honor all military service veterans. It is a day to remember the loyalty and the dedication of all servicemen and women for their service to the United States of America, who have given their time, their tears, their blood, and sometimes their very lives to strengthen and defend America, democracy and human rights around the world.

Veterans Day is meant to thank and appreciate men and women who have or are serving in any branch of the United States Army, Marines, Air Force or Marines. It also includes those who have or do service in the National Guard and other military branch services, regardless of rank or service station.

Veterans Day used to be called both Armistice Day and Remembrance Day, the date selected because November 11th is the anniversary of the signing of the armistice at the end of the First World War in 1918. According to historical records, the First World War ended in the eleventh hour of the eleventh day of the eleventh month, which makes it understandable that such a date would be set aside in commemoration forever thereafter. President Woodrow Wilson oversaw the first observation of the day in 1919, and by 1926 Congress passed a resolution asking all Americans to recognize the special day.

In 1938, Veterans Day became recognized as a national holiday. It is a national day of observance and government offices and banks are closed, though schools and most private businesses remain open. Veterans groups and organizations throughout the country celebrate the day, and citizens attend parades, cemetery services and other local events. Schools often honor the day by inviting veterans to speak to students, and red, white and blue decorations, as well as American flags, adorn sidewalks, buildings, homes and schools around the nation.

The observance of Veterans Day is to recognize and honor soldiers and servicemen and women serving in the United States and abroad, while Memorial Day is meant to honor the military dead from battles and wars fought by Americans throughout this country’s history. It doesn’t matter whether or not the service veteran saw actual combat or not, or if they have served in peacetime or during a time of war. American veterans have given years of their lives to the service of their country, whether that service was given in Fort Lewis, Washington, or Korea, Vietnam, Afghanistan or Iran or Iraq.

Veterans Day is a day for grandfathers and fathers to tell their children and grandchildren about their experiences, to perpetuate feelings of loyalty and service of country to the younger generation. It is a time of appreciation and an awakened awareness of what veterans, both young and old, do and have done for their country. Veterans Day is not meant to glorify war or encourage hatred or intolerance of different cultures, but a time to realize that the price of freedom and democracy sometimes comes at a very high price. Every country in the world has some sort of military force, and Veterans Day is celebrated in other countries besides the United States, though the names and dates may be different.

Veterans Day offers all Americans the chance to fully appreciate the sons, daughters, husbands, wives and brothers and sisters of nearly every family in the country for feeling enough pride in their country to defend it against tyranny and attack. Veterans Day is a time when Americans say ‘thank-you’ to the men and women of all races, creeds and beliefs, for doing what they feel is their duty and offering several years’ of their lives to the ideals that America stands for; peace, freedom and democracy.