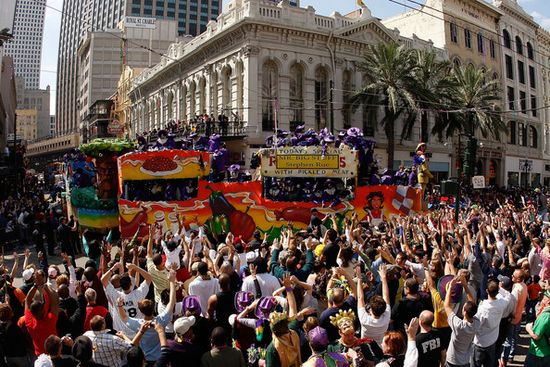 Free For All on Mardi Gras Day

Most people don’t really understand what the celebration of Mardi Gras is all about, they just know that it’s a very popular holiday celebrated in New Orleans, Louisiana, every year, just before Christians throughout the United States observe the season of Lent.

First of all, Mardi Gras means ‘Fat Tuesday’ in French, and since New Orleans’ population is heavily comprised of those with French ancestry, it stands to reason that the holiday bear a French name. It used to also be known as the Twelfth Night celebration, at least in the days leading up to the nineteenth century. This celebration of revelers has been practiced since the mid-1700’s in New Orleans, and was meant to mark the day before the fasting of Lent began. Many in the general population took the opportunity to gorge themselves on feasting and revelry before the more somber and limiting restrictions of Lent came to pass, and as the years passed, this celebration has morphed into an all out free-for-all every spring.

The reason behind the celebration is found in religious custom. Typically, during the season of Lent, meat was prohibited, with the exception of fish. Because of that, and due to the lack of refrigeration, many people found themselves with an overabundance of meats on hand just prior to the Lent observance. Lent always begins on the seventh Wednesday prior to Easter Sunday, more commonly known as Ash Wednesday. It came to pass that people would hold a feast on the day before that, on Tuesday, not only to use up supplies of meat, but also as a chance to fill up on favorite foods and drinks before the observance of Lent curtailed such enjoyments. The day is also known as Shrove Tuesday.

Today, this date, at least in New Orleans and in other specific locations around the world, is celebrated by extravagant parades and revelry that sometimes gets out of hand. New Orleans’s Mardi Gras is know for its colorful, fanciful parade floats, whose riders toss candy and colorful beads to the crowds that line the streets. It’s also known for it’s wild parties and escapades that cause the cities’ law enforcement personnel onto the streets in cars, on foot and on horseback to contain crowds and maintain some semblance of peace and order. Young people especially use Mardi Gras as an opportunity to go wild, and while most of the antics of young people are meant in good fun, it doesn’t always end that way. Club owners and vendors make enormous amounts of money during the celebration of Mardi Gras, when hundreds of thousands of people descend on New Orleans to celebrate, eat and drink their fill.

While many American’s frown on the antics and rowdiness of activities of Mardi Gras in New Orleans, the celebration tradition has been observed there for over two hundred years and shows no signs of stopping. While some attendees may get out of line, the majority of Mardi Gras celebrants are law abiding and venture to New Orleans to enjoy the atmosphere of a custom that has been passed down from generation to generation.

Mardi Gras is also celebrated in many homes around the country, though not on such a grand scale as the celebration in New Orleans. Family get-togethers mark the beginning of a somber season of self-reflection that leads to Easter Sunday and the birth of new life and hope for millions of Christians around the country.

Mardi Gras is a national recognized holiday in America, and while it’s not a day off for most people, the day is meant to signal the end of one season and the beginning of another, and whether celebrated with parades and revelry or a quiet evening enjoying a nice dinner at home, the date is one that has become permanently etched in the consciousness of Americans.

← What Independence Day Means
What Is Child Health Day →
Scroll Up