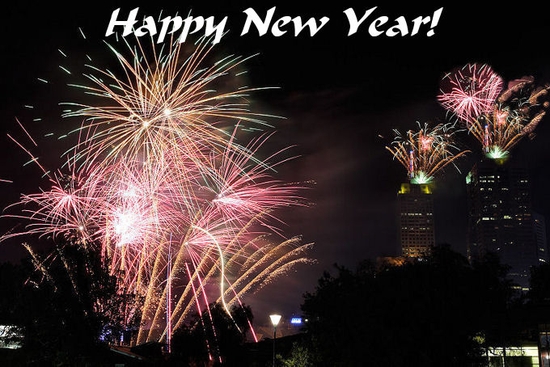 Since the beginning of time, people have celebrated the first day of a new year, hoping for better crops, larger herds, no sickness or drought. The ancient Egyptians, Romans and the Greeks all set aside a day to mark their calendars as the first day of the New Year, and it wasn’t until after December 25th was officially recognized as Christmas Day that the Church also designated January 1st as a religious festival that coincided with the ceremonial circumcision of the baby Jesus. Known first as the Feast of the Circumcision, this New Year’s Day observance was first celebrated be the Roman church in the year 487, though it’s only been recognized by the Anglican Church since about 1549.

The United States celebrates the New Year in different ways. America’s first President, George Washington, began a tradition by opening his house in Philadelphia to the public to enjoy a formal reception on New Year’s Day, and through his seven years as president, he continued with the tradition, shaking hands and serving punch and cakes. President Thomas Jefferson also followed Washington’s example, and the receptions grew larger and fancier. By the time President Taft held his own New Year’s celebration in 1910, hundred of guests had gathered to join military and political leaders from around the country as the New Year struck. This White House tradition was suspended during the presidency of Franklin Roosevelt after his first attempt to receive guests on January 1, 1934. His medical condition prevented him from standing for long occasions, and throughout his three terms as president, the New Year’s ‘White House party’ events were curtailed.

Eventually, those in the political arena began to hold New Year’s parties and receptions at private residences, a practice that continues to this day. Following the strike of midnight, participants revel in New Year festivities and wish for a more prosperous year than the one that just made a noisy farewell. These days, New Year’s Day is celebrated with parades in nearly every major city in America. The most famous New Year’s Day parade is the Tournament of Roses parade, held in Pasadena, California, every New Year’s Day since 1886. Founded by the Valley Hunt Club, the parade began as a simple draping of floral arrangements on horse drawn carriages, followed shortly thereafter by some sort of sporting event. Today, the Tournament of Roses Parade attracts hundreds of thousands of visitors from around the world, and the parade is televised throughout the world as well. The parade is followed by the infamous Rose Bowl football game, a championship game between the two leading college football teams in the country. The first post Tournament of Roses football game kicked off in 1902 at Tournament Park. The second year, a football game wasn’t played following the parade, but a chariot race did entertain thousands and continued to do so until 1916, when football became the sporting event of choice. Post Tournament of Roses football games have been played in the Rose Bowl since 1923, when that famous stadium was built.

Other collegiate football games are played throughout the United States on New Year’s Day, including the Orange Bowl and the Sugar Bowl. No New Year’s day would seem the same without the drone of radios and televisions blaring scores and touchdowns as the ladies of the house create sumptuous halftime snacks like chili, chips, beer and soda. For most Americans, New Year’s Day is a holiday for family and reflection, when New Year’s Resolutions are made to improve goals or to make changes to previous resolutions. Whether celebrated alone or in a group of people having a party, New Year’s Day, since ancient times, is a day to hope and wish for better times, health and the continued pursuit of happiness.

← What Is Singles’ Awareness Day
When Is Nevada Day →
Scroll Up