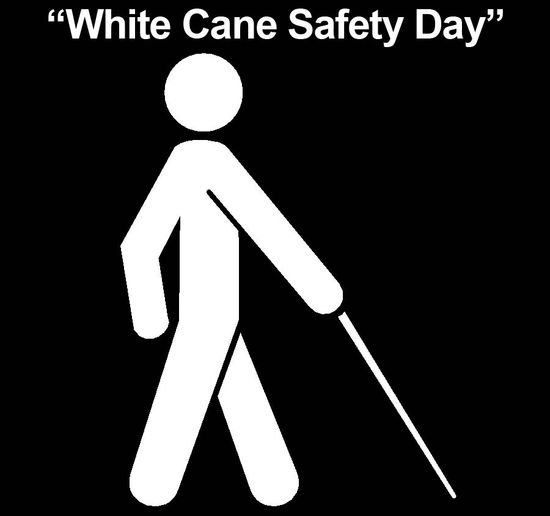 Every day, millions of blind or visually disabled Americans take to streets, rivers and playgrounds around the country, aided by guide dogs or white canes to help navigate their cities, parks and rural roads. A white cane not only serves as an alert to approaching pedestrians and vehicles that a person is legally blind, but also serves as a tool that not only helps blind persons ‘see’ where they are, but also serves as an object of independence for many.

The first ‘White Cane Safety Day’, officially designated October 15th of 1964, is a day to be observed and recognized by all Americans. President Lyndon B. Johnson realized the importance of the white cane as a symbol of independence for millions of blind people, and commended all blind people for their spirit of independence and determination to be self-reliant. “The white cane in our society has become one of the symbols of a blind person’s ability come and go on his own,” President Johnson said. “Its use has promoted courtesy and special consideration to the blind on our streets and highways. To make our people more fully aware of the meaning of the white cane and of the need for motorists to exercise special care for the blind persons who carry it, Congress, by a joint resolution approved as of October 6, 1964, has authorized the President to proclaim October 15 of each year as White Cane Safety Day.”

The National Federation of the Blind had long attempted to gain recognition for blind Americans. The first state law that allowed only a blind person to carry a white cane was passed in 1930. White Cane Safety Day serves as an opportunity for all Americans to recognize the rights of blind persons everywhere, and since 1964, blind citizens have gained more mobility and freedom to come and go as they please due to the use of the white cane on a daily basis. Not too many decades ago, it was rare to see blind people on the streets or in public places, yet today, blind people work in offices and operate machinery and everything in between.

Education in schools allows children to realize that blindness does not necessarily mean that the blind person can’t work or enjoy life as other sighted people do. With the use of a white cane, blind persons can achieve the freedom that their grandparents only dreamed of. After they become adept using a white cane, blind people are able to navigate the world around them with incredible speed and confidence. The white cane saw an increase of use after World War Two, when thousands of returning soldiers, blinded or suffering from severe vision loss from wounds received in battle, made it the most national recognized tool for getting around. The white cane is not a symbol of a handicap, but rather a symbol of independence and confidence. Anyone carrying a white cane has the right to go anywhere they would like and cannot be barred from any location.

Today, millions of Americans travel with the familiar white cane with the red tip at the bottom. Some canes collapse and can be stowed in a pocket or purse, while others can’t. Regardless, it’s an invaluable tool to many. Created in 1930 by George Bonham of Illinois, the white cane now aids young and old alike through their daily living needs and desires. Blind people are taught how to properly use a white cane, and how to use it to help them navigate streets, intersections, and even dirt roads. Organizations and clubs throughout the United States use White Cane Safety Day to promote education to all age groups and are often called upon to speak in community venues and schools. The white cane is a simple tool, of simple construction, but the service it provides is priceless. Every American should respect those who use a white cane, as they exemplify the American spirit of independence and self-reliance.