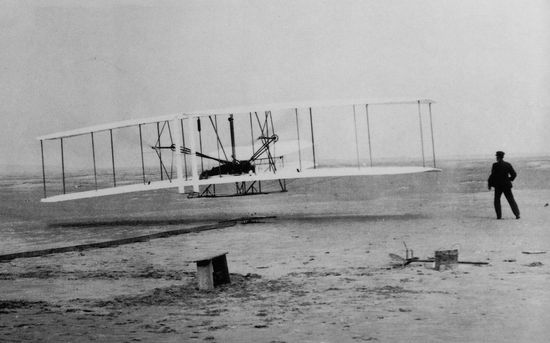 The celebration of flight is honored on Wright Brothers Day every December 17th, the anniversary of the first successful flights in a mechanically propelled airplane, piloted by Wilbur Wright at Kitty Hawk, North Carolina in 1903.

The Wright brothers are known as the fathers of flight, and with good reason. While man has been reaching for the stars for thousands of years, Orville and Wilbur Wright made such a possibility a reality. Wilbur was born in 1867, while his little brother, Orville, was born four years later in 1871. Both Wilbur and Orville nurtured dreams of building airplanes and flying, and in the early 1900’s they did just that. Orville is quoted as saying; “We were lucky enough to grow up in an environment where there was always much encouragement to children to pursue intellectual interests; to investigate whatever aroused curiosity.”

Flying was more than a curiosity to Orville and Wilbur Wright. It was their passion and their goal, one they obtained on the seashore of Kitty Hawk on December 17th, 1903. Despite years of failure and ridicule, the two brothers forged a path that today has taken mankind to the moon and back. The spirit of the Wright Brothers, born in the sands of Kitty Hawk, now reaches to the far corners of the earth and beyond.

Wright Brothers Day is a cause for celebration within not only the American flight industry, but around the world and anywhere airplanes fly today. If it were not for the determination and contributions of the Wright brothers, flight, as we know it today, could very well have been delayed by decades, if not more.

December 17th is a day when the nation observes and honors the brothers who dared to flaunt gravity, and succeed. Depending on where you’re from, the day is celebrated in different ways. In Kitty Hawk, North Carolina, memorials and civic events draw attention to the most famous location in the history of flight. School aged children across the nation learn about the historic flight at Kitty Hawk in school curriculum and fashion paper airplanes, kites and other designs meant to honor the discovery of flight. Older students learn about man’s attempts to fly, from the beginnings of Greek mythology to the current designs of the space shuttle.

The glory of flight is celebrated on Wright Brothers Day. Airports around the country honor the brothers by hanging posters or banners recognizing their great contributions to the aviation industry. Various ceremonies and activities at local and state levels bring honor to the memory of the brothers who changed the face of transportation forever. Aviation clubs and schools invariably speak of the event that brought mankind rapidly into the 20th century, and was the jumping off point for numerous inventions and discoveries.

While Wilbur and Orville most probably knew that their success would change the face of the nation forever, it is unlikely that they realized how important their experiment would become for all of mankind, regardless of country or language. Air travel today joins continents and peoples from around the globe. Today’s astronauts, descendants of the Wright Brothers, are able to walk in space. The Wright brothers deserve to be honored and remembered every December 17th, as pioneers for an entirely new way to look at the world around us.

Every time an airplane is seen or heard, remember the drive and determination by the pair of brothers who would not relinquish their dream of flight despite numerous obstacles and setbacks. The spirit of America lives on in the legacy left by the Wright brothers, and should continue to be passed down from generation to generation.