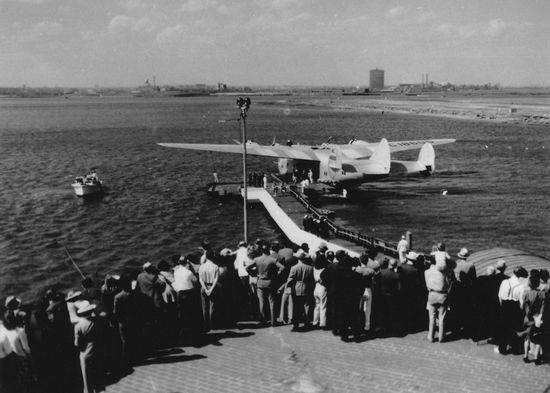 Today, it’s easy to take air travel for granted. Most of the population of the United States can not imagine what it would be like not to be able to fly anywhere in the world, but not so long ago, such an endeavor was impossible.

Thanks to the inventiveness of the Wright brothers, who literally flew America into the aviation era, people today can fly to various destinations, not only within this country, but throughout the world. Pan American Aviation Day is observed every December 17th as a day to celebrate travel between the Americas, and because of such possibilities, people from America, Mexico and countries in South America enjoy cultural communication and experiences on a daily basis.

One of the first American based airlines to offer passengers Mexican and South American destinations, Pan-American Airlines, was created in 1927. According to the founder of the airline, Juan Trippe, it was designed ‘to provide mass air transportation for the average man at rates he can afford to pay’. At first, flights to southern destinations were limited to mail service, the first being to Havana, Cuba. That first flight reached a mere ninety miles from Key West, Florida to Havana, but it was the beginning of something big. In 1928, six passengers flew the same route on a Pan American Fokker F-7. Based in Miami, Florida, Pan American continued to grow and transport passengers until, in 1931, a staggering thirty-three passengers climbed aboard a Clipper Sikorsky while thousands of onlookers watched the pilot, Charles Lindbergh, take the pilots seat. In 1934, another Clipper loaded fifteen passengers on their way to Hong Kong! The plane, traveling at a speed of 130 miles per hour, arrived safely and began an entirely new era of transpacific flights from San Francisco, Los Angeles and ports in the South Pacific and South America as well.

The very first around-the-world flight from Pan American occurred in 1947, when a flight carrying twenty passengers flew from New York City to arrive in San Francisco ninety two hours and some minutes after it had taken off. Of course, the plane landed in ten countries over the 12-day flight duration, but it was a spectacular accomplishment for the aviation industry.

Thanks to such innovations, patience and daring on the part of early generations to develop and improve the aviation industry, people today are able to fly from San Francisco to Hong Kong in less that fifteen hours. Flights depart daily for South American destinations in Peru, Brazil and Venezuela, as well as ports in the South Pacific such as Tahiti and Guam. Pan-American airlines were one of the founding trans-continental airlines to offer passengers safe, economical travel opportunities in the world. The accomplishments of the company opened doors to possibilities that are still being enjoyed today.

Since then, the Pan-American airline company has been absorbed into Delta Airlines, and her former Pacific routes have been sold to United Airlines, while her Atlantic routes were sold to Delta and American Airlines. Nevertheless, the legacy of Pan American continues to this day, and the dedication and determination of their founders are enjoyed by billions of world travelers today.

Pan American Aviation Day celebrates more than an airline however; it celebrates a link between two continents that has fostered good relations between two cultures and languages that have been breeched by travel and good will. Pan American Day is a day for all Americans to honor and remember the discoveries and innovations that a handful of men and women were determined to share with all Americans. To this day, the legacy of those aviation pioneers is celebrated every December 17th, as well as every August, for Aviation Day.

← How to Honor Peace Officers
When Is Tax Day →
Scroll Up