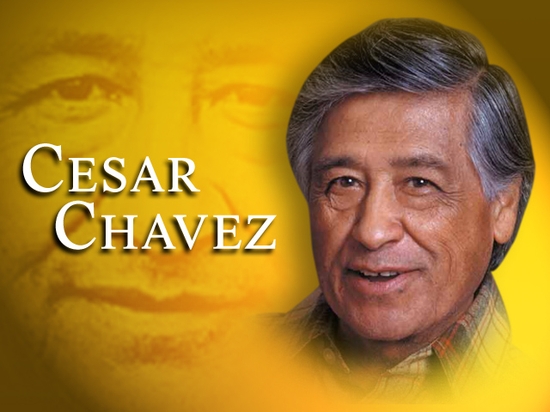 César Chávez’s name is synonymous with civil rights, and most closely identified with the rights of immigrant Mexican-American workers throughout the United States. Cesar Chavez was called by President John F. Kennedy, “One of the heroic figures of our time.”

Born on March 31, 1927, César Chávez was a second generation American who was born in the wastelands of Yuma, Arizona. Because of the difficulties of making a living during the years leading up to the Great Depression in America, his family migrated from farm to farm and ranch to ranch throughout the western states in order to find seasonal work. Working on farms and ranchlands is not an easy job, and during that time, was about the only option that many poor people had to earn and make a living. Schooling for children was nearly non-existent, as families were expected to follow the crops to survive. Because it was so difficult to attend school on any regular basis, the children of migrant farm workers, including César Chávez, lacked formal education opportunities.

As a young man, César escaped the fields and joined the Navy in 1946. After his tour of duty ended, he returned to California, where he married and fathered eight children. In 1952, César joined the Community Service Organization, which was at that time a powerful Latino civil rights group. He became increasingly involved in fighting racial and economic discrimination, organized voting drives and attempted to form laws and regulations that protected the rights of migrant farm workers throughout the United States.

In 1962, César founded the National Farm Workers Association, which today is known as the United Farm Workers of America. For thirty years, César fought for his fellow migrant workers, leading strikes and boycotts that drew national attention to the plight and economic status of Latinos around the country. Coinciding with many African-American civil rights movements around the country, César managed to draw national attention to his cause until he was able to form a union that was designed to protect and serve the needs of migrants working in every state of the continent.

César Chávez’s birthday is celebrated every March 31st, a day for Americans of all races to appreciate the efforts of one man to improve the lot of many. César didn’t only fight for the rights of Latino’s; he fought for the rights of every American. He fought against child labor and for equal pay for all men and women, regardless of education or the color of their skin. He followed peaceful avenues to promote his cause, and for that he is respected not only in America, but around the globe as well.

César Chávez organized peaceful boycotts, strikes, protests and events that focused the eyes of America on the poor people of this country, people that were forced by times or circumstances to follow the crops to make their living. His efforts saw the first organized efforts to provide medical and educational programs for such migratory individuals and families, and have ensured humane living conditions and pay for hundreds of thousands of people across the nation.
All Americans, Latino, remember César Chávez’s’ birthday or not. Despite the fact that César Chávez never made more than ten thousand dollars a year in his lifetime, he stands for the epitome of success in what he has given his nation. By materialistic standards, many might have considered César Chávez a poor man, but to millions of people he served and helped, César Chávez was one of the richest men alive. The dedicated American passed away in 1993, but his life and efforts and huge sacrifices are remembered and celebrated in schools and homes, businesses and national organizations throughout the country.