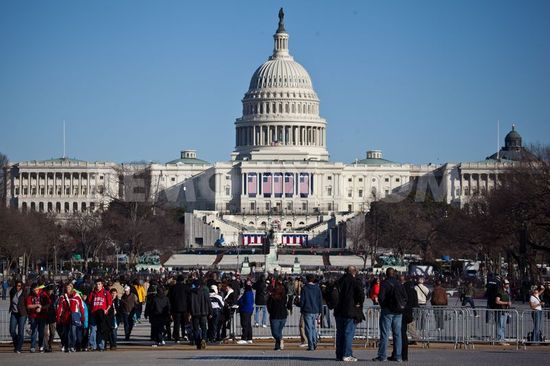 After the president completes the oath of office, military bands play ‘Hail to the Chief’, followed by a twenty-one Howitzer gun salute. The President then makes a speech, some which last longer than others, which is followed, since 1953, by a luncheon held by Congress members.

Since the early 1800’s it’s been a tradition that the president then travel down Pennsylvania Avenue from the steps of the Capitol building to the White House, either by carriage, car or walking, as President Jimmy Carter did in 1977. The parade has been held every inauguration day since 1805, except in 1985 following President Ronald Reagan’s second inauguration due to frigid temperatures.

The entire inauguration ceremony usually lasts ten days, with five days before and following the inauguration day ceremonies. Many security agencies are charged with keeping the peace and ensuring the safety of government officials, including the Secret Service, the Capitol Police, and the Police Department of the District of Columbia. Inaugural balls are held and attended by leaders and representatives from nations around the globe. It’s a time when Washington D.C. shines, and politicians and their families make appearances and speeches.

Generally, Inauguration Day is a time for all American’s, no matter what political party they belong to, to accept and recognize the new President of the United States. All Americans honor the position of the President and understand the traditions and solemnity due to the occasion, even those who didn’t vote for the President now in office. Especially in Washington D.C., red, white and blue decorations and banners line city streets, especially Pennsylvania Avenue, and the United States Capitol and White House are duly groomed and decorated.

Inauguration Day is unique to America, one that clearly illustrates to the world at large that once the vote for president has been cast, Americans stand united no matter which political party they belong to. Opposing party members may not agree with every decision or personal style of any individual president, but all look to the presidential office as one that belongs to their elected leader and Commander-in-Chief.