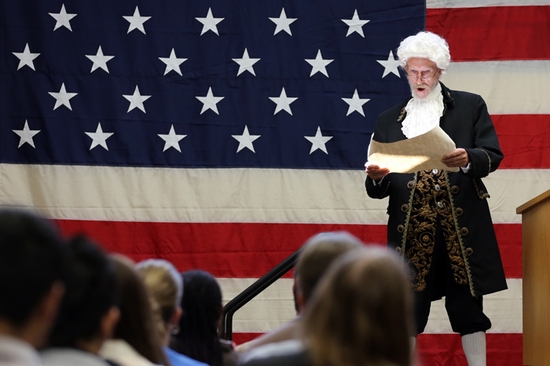 The Constitution of the United States of America is generally regarded by people around the world, but most especially by American citizens, to be the greatest document written by man that declares the rights of men everywhere to be free. Freedom is the cornerstone of the American way of life: freedom to worship whomever we please, freedom to gather, freedom to come and go as we please, and other such freedoms are ingrained into the American spirit forever.

September 17, 1787 is one of the most important dates in the history of the United States because it was on this day that the Constitution was signed by the men who wrote it. Forever enshrined in the Smithsonian, millions of Americans every year flock to Washington D.C. to glimpse this famous document that serves as a basis for everything America stands for and believes in.

The first celebration of the signing of the Constitution took place in Philadelphia, and to this day, the biggest and most festive celebrations take place in the city that served as our first capitol. In the 1900’s however, the day took on a special importance, especially when the one-hundredth anniversary of the signing approached. A national celebration of the day was celebrated in Philadelphia in 1887 with the direction of the Centennial Constitution Commission. Every state in the Union was represented at the festivities, as were territories not yet included in statehood. A parade of more than 12,000 people helped to celebrate the grand event, followed by another parade the following day, with over 30,000 participants.

Groups and organizations today, such as the Daughters and Sons of the American Revolution, often lead festivities in honor of the signing, and school plays and biographical lessons are given to honor the Founding Fathers and their ideals. Children start off their school year by learning about George Washington, Thomas Jefferson, Benjamin Franklin and Paul Revere as part of their school curriculum and crafts and readings are geared toward the beginnings of our country.

Over two hundred years has passed since the signing of the United States Constitution, but the day is still honored with due pomp and ceremony in Washington D.C. and many other cities around the nation. It is a day to remember the roots of our country, our freedom and our way of life. Constitution Week is a time to remember the father of our country, George Washington, and his service as general and first president of our nation, as well as the sacrifices made by other of our founding fathers. Noah Webster said that George Washington was “the greatest political leader of his time and also the greatest intellectual and moral force of the Revolutionary period.”

Constitution Week celebrates the writing of the document that makes America what it is today. It was framed and created on principals and is worthy of acceptance by all Americans. It provides protection against tyranny and assures democracy. It allows the American people to decide the course of their future, where every citizen has the right to vote, to debate and to disagree without fear. The greatness of the Constitution is that it gives power to the people, and it is the people who decide our future. As one of the greatest documents outlining human rights and freedoms in the history of mankind, it is right that Americans everywhere should remember September 17th as the day they were given their freedoms, freedoms which are never to be taken for granted, but that are worth fighting for, and at times, dying for. Constitution Week is a period of time where all Americans celebrate America and her special place in the world, a time where American pride and spirit rings across the nation.