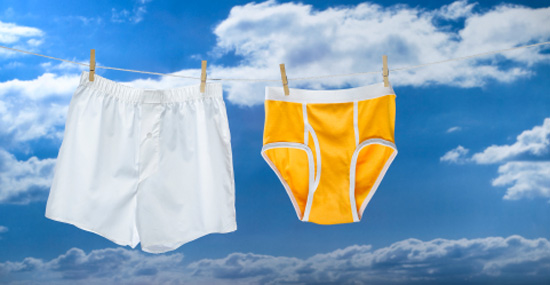 It is the timeless question that is asked to so many, ‘boxers or briefs?’ This seems to be a loaded question these days as now there are many different types of underwear that a man can choose from. Today’s underwear world has the likes of:

•    Thongs: Yes for guys too, but really, are you concerned about your ‘panty lines?’
•    Bikini briefs: Again, sounds like it are for the ladies and they really don’t appear to be all that cozy.
•    Edible: If this is your bag, keep it to yourself.

Even though there are several other types of underwear these days, these two styles remain the most popular and which type of underwear you wear can say a lot about you. While it really all comes down to comfort, the following breaks down the main differences between boxers and briefs and what it says about you:

•    Boxers: The old boxer style underwear seems to be the underwear of choice by most men. Not that it is a hard fast rule, but it seems that men that are in their early 20s to mid 30s wear boxers as opposed to briefs. This could be because the women in their lives prefer it them or it may just boil down to peer pressure. Boxers wear more like shorts than they do underwear and it may be this feeling of freedom that sways many of the younger generation to wear them.

•    Briefs: These are also known as tighty-whiteys. As far as men go, these are typically worn by those in their late 30s and beyond. This could be that they are just used to their women and simply don’t care about peer pressure anymore but it is really probably because they are more comfortable for them. Briefs do after all ‘hold’ everything in much better than the boxers do. Briefs have really received a bad rap as the ‘boring’ underwear but many brands these days are anything but white and cotton or boring. They now come in a wide variety of colors and fabrics so if you haven’t considered wearing briefs in a while, you may want to take another look as the times have definitely changed.

•    Boxer briefs: Ah, least you forget about the boxer briefs. If you are on the fence about what type of underwear to get check these out as they offer the best of both worlds. Boxer briefs wear like boxer shorts, but hold like briefs. This type of underwear seems to be preferred by athletes, but with such a variety of colors and styles, they are quickly gaining popularity among all men.

Whatever type of underwear you prefer, you should always make sure to have clean ones with no holes. There is really no excuse to have either boxers or briefs or any other type for that matter that are stained and full of holes. It is also unacceptable if you are a grown man to have underwear featuring super heroes or Sponge Bob, leave those types of Under Roos for the kids, you had your turn.

Again, it all comes down to what is the most comfortable for you. One man’s pain is another man’s pleasure. So which is it, boxers or briefs?