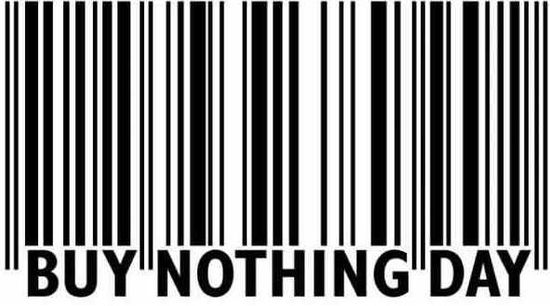 How to Celebrate Buy Nothing Day

As most residents in the United States know, the day after Thanksgiving is considered to be not only the first official day of the Christmas shopping season, but it is also known as the busiest shopping day of the year.

While advertised as such, the day after Thanksgiving, while a very busy shopping day, is not the busiest. Believe it or not, studies have been made showing that the last Thursday before Christmas is actually the busiest shopping day. Many people, growing alarmed at the rampant commercialism of the season, have decided to do something about it. Their suggestion? Buy Nothing!

That’s right. A magazine called Adbusters founded Buy Nothing Day as a direct challenge to every and all Americans to refrain from buying anything the day after Thanksgiving, as a celebration against what they term ‘rampant consumerism and consumer culture’. Supporting such a measure is free, of course, and allows anyone to participate. First started in 2002, the movement has gained attention and followers not only throughout the United States, but also around the world. Every November 24th, the founders of Buy Nothing Day remind everyone through ads, their website and fliers, that no one was ‘born to shop’. They ask that for a period of twenty-four hours, consumers refrain from purchasing items and gifts for Christmas in order to protest the commercialism that has infested the holiday season.

The focus of the day, which is not an officially recognized state or federal day of observance, is concern over the growing debt and ecological damage that pressured shopping for the holidays inflicts on consumers everywhere. As an alternative, they suggest refraining from bending to pressure buying, and becoming more aware of  products being purchased. Supporting recycling and environmentally friendly products, Buy Nothing Day encourages consumers to look for biodegradable products as well as gifts and products made of recycled materials for their gift giving over the holidays.

At its foundation, the day also serves as a reminder of what the Christmas season is really supposed to be about, and that is definitely not how many Christmas presents we can stuff under our Christmas trees or throwing the largest office Christmas party in the history of mankind.

For people who support Buy Nothing Day, Christmas gifts will most likely be those which are homemade, locally crafted, made of recycled materials or even those that aren’t bought, but traded. Early Americans rarely had money, and trading for goods and services was an accepted form of completing all kinds of transactions. On a humorous note, many participants of Buy Nothing Day don Santa Claus costumes and gather to provide ‘Zenta Santa’s’ to mall shoppers. These special Santa’s meditate and offer stress relief techniques to harried shoppers, in addition to soup, coffee and an opportunity to join in group ‘ohms’. As if that isn’t enough, the group is also joined by participants who don long robes and Jesus masks, and who approach shoppers to inquire, “What would Jesus buy?”

While many people should and do enjoy the holiday shopping season, Buy Nothing Day serves to remind all Americans that we, as consumers, should be the ones to determine what we buy, when we buy it and why we buy it. Commercialism exerts social pressure on all households during the holiday season, and Buy Nothing Day is nothing more than an attempt to put the control back into the hands of the millions of Americans who feel pressured into buying the most, the biggest and the most expensive, every holiday season.

Buy Nothing Day is celebrated by more people every year, and perhaps one day, America will see the day following Thanksgiving, not as a day to begin the holiday shopping season, but as one to reflect on its true meaning.