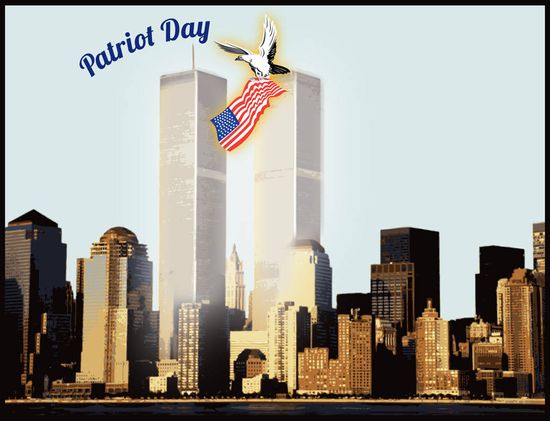 Patriot Day is a day for all Americans to remember the tragedy of events that unfolded during early morning hours in New York City on September 11, 2001.

For the second time since America became an independent nation, she found herself under attack. Civilian targets as well as the Pentagon were the intended targets of these terrorists, and nearly three thousand Americans were killed before the dust settled. The day will forever be known as 9/11 for Americans and people all over the world. A month later, in October, a U.S. House joint resolution requested that President George W. Bush designate September 11th as a day to honor the dead from that deadly ambush. The day was originally called the National Day of Prayer and Remembrance for the Victims of the Terrorist Attacks, but in 2002, the name was shortened to state, quite simply, ‘Patriot’s Day’. Since then, American citizens and citizens from around the world pause at the times of the several attacks on that fateful morning in order to honor and remember the dead. While not considered a national ‘holiday’ as such, Patriot Day is indeed a day for all to consider the memories of the fallen; for civilians and the firemen and policemen that did their best to save them. The day will always be remembered as a day of horror and despair, but also courage, bravery and loyalty given to our country, especially by the flight crew and passengers of Flight 93, which crashed in Shanksville, Pennsylvania after passengers attempted to abort the terrorists plans to crash the plane into the State Capitol.

The event, which for some equaled the feelings that resulted following the Japanese attack on Pearl Harbor, Hawaii, in 1941, signaling America’s entry into the Second World War, struck a chord of patriotism in the United States unequalled since that attack sixty years earlier. Americans around the world pause for reflection starting the moment the first airplane, American Airlines Flight 11, crashed into the World Trade Center Tower North at 8:46:30, followed a short time later by United Flight 175 into World Trace Center Tower South at 9:02:59. Less than an hour later, American Airlines Flight 77 crashed into the Pentagon at 9:37:46, followed roughly twenty minutes later by the crash of United Airlines Flight 93, which crashed outside Shanksville, Pennsylvania at 10:03:11.

Patriot Day is now a day during which Americans somberly reflect the memory of the civilians and fire and police department personnel who died that day, as well as the importance of remaining united as a nation. The largest memorial service for this day of remembrance is held every September 11th at what is now called Ground Zero, where the World Trade Towers once stood, and periods of silence honor the fallen beginning at 8:46 and end with candlelight vigils. Flags around the country are lowered to half-staff. On the first anniversary of the tragedy, New York City’s mayor, Rudy Guliani, lit an eternal flame and an outdoor public memorial is under construction at the Pentagon, to be completed by the fall of 2008.

A national memorial is also under construction to commemorate the flight crew and passengers of United Flight 93 in Pennsylvania, while a World Trade Center Memorial is expected to be completed in 2009. In addition to physical memorials to the day of remembrance, families of many of the victims of 9/11 have set up charities, scholarship funds and memorial funds in the names of their loved ones to perpetuate their honor and their memories for generations to come. As with the attack on Pearl Harbor, the world will never forget the images burned into their memories following the attack on civilian and military targets that fateful morning.