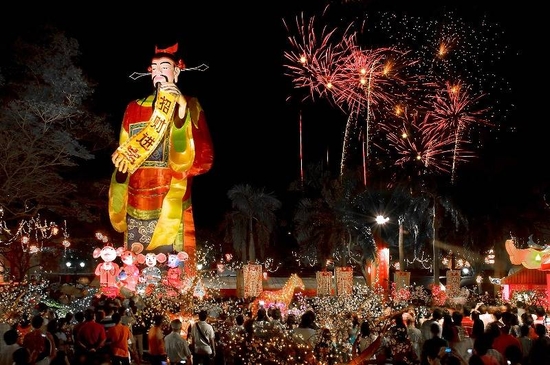 The Chinese New Year is the biggest holiday in China, much like Christmas is to Americans. It’s the longest lasting and most important celebration in the Chinese calendar and is celebrated by millions of Chinese-Americans in the United States as well as the majority of the population of China.

This year, the Chinese New Year beings on February 18the and will be known as the Year of the Pig. Chinese legend believes that Buddha once asked all animals to gather with him one New Year, but only twelve came. Buddha named a year after each of the animals, and stated that people born during the animal year would inherit some of their traits and characteristics. Those born in the year of the Pig are known for their loyalty, hard working personalities and excellent manners. Both in China and America, relationships, work decisions and aspects of personal life choices are often made depending on such considerations. In China, the Chinese New Year is celebrated with feasts, fireworks and family reunions. In America, the same time-honored traditions are also followed, though on a shorter time schedule than that observed in Mainland China. Chinese New Year celebrations last fifteen days in China, though in the United States, it’s sometimes shorter.

Chinese-Americans celebrate the New Year with the color red; red lanterns, red ‘lucky money’ in red envelopes, red clothes and decorations. Red is a color of fire, which according to Chinese legend can drive away bad luck. The Chinese New Year is a time for family and family reunions, and banquets and feasts are held. The red packets, or envelopes, always contain money in even denominations, known as Ya Sui Qian, or ‘age suppressing money’. Firecrackers are also a common sight and sound during the Chinese New Year, and are sold in strings or by themselves. Encased in red paper, fireworks are lit to symbolize the driving away of bad luck or misfortune. Red banners are also hung from doorways.

Many Chinese-Americans visit the oldest or most senior member of their family on the first day of the Chinese New Year, and a Lion Dance is often enjoyed on this day as well. The second day finds many lighting incense at the graveside of departed family members. The second day is also reserved for daughters to visit their own families, while the third and fourth days are usually spent with one’s own family. On the fifth day of the Chinese New Year, people eat dumplings, while the seventh day is known as the ‘common man’s birthday’.

The last day of the Chinese New Year celebrations end with the Lantern Festival. A highlight of the Lantern Festival is the Dragon Dance, in which the dragon may be anywhere from a few feet to a hundred feet long. This dragon, make of silk, paper or other lightweight materials, is help up in the air by young men as they dance their way through streets, accompanied by fireworks and joyous celebrants. In the United States, the Dragon Dance is sometimes accompanied by a parade with American-style floats. In Chinese-American communities in San Francisco, Los Angeles and New York City, the celebration is attended by thousands of Chinese citizens, visitors and members of other cultures.

No matter what your heritage, celebration of the Chinese New Year is a time for family and friends, and you don’t have to be Chinese to celebrate that, nor to wish for prosperity and good fortune.