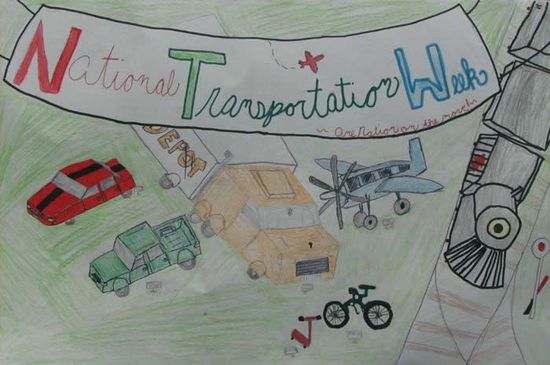 Every day, millions of products are shipped across the United States in big rigs, airplanes take passengers to foreign destinations, and cruise lines offer luxurious vacations to exotic ports of call. Billions of Americans commute to work every day, or cart the kids to school and run errands and visit with friends. Without transportation, the United States of America would come to a standstill.

Since the days of horses and buggies, public transportation has gotten people from point A to point B. Since the invention of Mr. Ford’s Model T to the latest landing of the space shuttle, Americans have been on the go. National Transportation Week is a time when all Americans should stop, if just for a moment or two, to realize the impact that wheels have had on not only our country, but also the world. Today, we consider transportation a part of our daily lives, and could not imagine anything else. However, there was a time when planes, trains and automobiles were not such a part of every day life and there are many still around to attest to that fact!

Every May 13th through 19th honors National Transportation Week, a week that should offer all Americans a chance to appreciate the inventions and determination of those who came before us to broaden horizons, to fly with the birds and to reach for the stars. National Transportation allows produce and goods to be transported to every part of the country, as well as providing employment for millions of Americans who work on our highways and streets every day. Building freeways, roads and bridges to help us get where we want to go, is a public work that was begun and has served the American people since the 1930’s. The United States Department of Transportation, or UDOT, as it is commonly known, makes sure that our nation’s highways and byways are kept as open and in good repair as possible.

Transportation connects people across the country. A journey that used to take six months or longer can now be accomplished in mere hours. A voyage across the ocean typically took months, yet today, Americans can fly to China in little over half a day. Sure, we have grown spoiled by such conveniences, and such an attitude may be perfectly natural since most of us grew up with wheels and planes. However, during National Transportation Week, take the time to envision your world without such luxuries. Many school children, and adults, are encouraged to do without their wheels for at least one day during this week, to fully appreciate how valuable such inventions have become in the daily life of all Americans. Even if we don’t own a car, we have buses or taxis, trains and subways to get us where we’re going.

Nearly four million miles of roads transverse the country, and allows imports and exports to be distributed around the nation and to other countries as well. Despite the growing numbers of vehicles on the road today, pollution and harmful emissions have decreased by almost 30% since the 1960’s. Researchers continue to create ways to decrease the greenhouse gas and carbon dioxide emissions due to demands from the American public to ‘clean up our act’, and the United States is a leader in fuel economy regulations and emissions guidelines.
The next time you and your family is on a trip, think a moment about what you are doing and where you are going, and how difficult would be to get there without the vehicle you’re driving and the road you’re traveling on. Someone had to build that car and lay that road for you, and National Transportation Week is a time when all Americans should remember the dedication and determination of those who came before us who dreamed of the impossible.

← How to Buy and Care for Nylons, Pantyhose, and Stockings
What Is National Poison Prevention Week →
Scroll Up