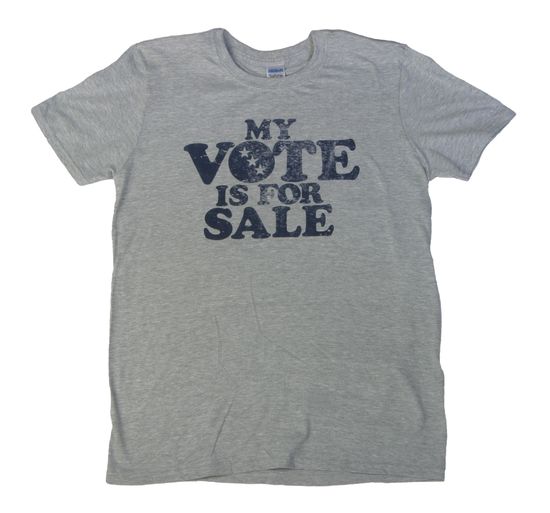 You make a political statement; chances are it may not be heard. But, wear it on your chest and you’ll stand out like a sore thumb or a messiah depending on which side of the public opinion you stand. Take the case of President George Bush. He seems the most hated man, but he’s adored too. An Afro-beat band called Mifuné, wearing custom t-shirts with a picture of George Bush with a line through it, was silenced in mid-performance at Tower City because the mall’s management felt the band’s attire was inappropriate.

It’s true since the time people started sporting t-shirts with their political views printed on them, it’s given them a new voice. It became that much easy to go with the mood of the nation or spark a controversy by wearing your political beliefs emblazoned on the fronts and backs of this apparel. Gone are the days when dress-code disputes limited themselves to gangsta gear or showing too much skin, politics has now become the new fashion mantra that’s giving sleepless nights to the administration. And the disputes arising out of it are making their way into the courts. Listen to this…a student gets reprimanded for wearing a t-shirt shouting ‘International Terrorist’ with a picture of President Bush. He’s told to remove it or face the consequences.  He contacts the ACLU. The group files a lawsuit and wins!

But why this sudden revival of playing politics with tees? Well, the times they’re a changin’…people’s lives today are more and more affected by such issues as Iraq war, terrorism and the talk of bringing back the draft. And this is adding to the frustration of otherwise God fearing and hard working individuals. Instead of taking up the arms, people are literally wearing their protests on their arms!

The t-shirt, of course, has long been a political tool. Starting out as part of a military uniform, it has ended up as a banner of political dissent. It was just half-a-century ago that the t-shirt was declared an official part of the US Marine Corp uniform. But, forty years later someone came up with the idea of using the blank space on the chest and back as a walking billboard. If you got a surface to write your views, can politics be far away! So, it’s no surprise that this casual wear started saying things with telling effect. Vietnam ‘Hell No, We Won’t Go’ defined the role of the t-shirt as a canvas for activism, advertising, ‘subvertising’ and politics of all persuasions. Since then, the variety in political messages is only limited by the imagination of the slogan and graphic creators, as there’s no dearth of political causes.

Today, if you want to have your political say on your custom t-shirt, you don’t have to go looking for a plain tee and try your hand at designing. There are apparel companies who’d help you out with that. And rightly so, with t-shirt being the billboard of today’s movement, why should you sacrifice quality and style with your amateur attempts. By using hi-tech machinery that allows innovative colours, embroidery and appliqué, these companies can help you in not only reproducing your idea, but evolving it too with the kind details you couldn’t even dream of. They’re aware that a simple t-shirt can be a vote for change.

So, if you want to highlight a political theme in humorous or satirical way on your tee, go for the established people in custom t-shirt printing business. They’ll design your political t-shirt in a way that’d get the message across in split seconds to make an instant impression.