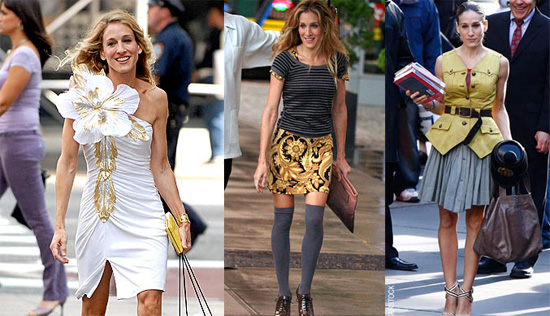 The HBO series and then later big screen movie of Sex and the City gave a whole generation of women a new way to look at life. One of the most popular characters on the show is Carrie Bradshaw who is played by Sarah Jessica Parker. On the show Bradshaw is a self confessed shopping junkie. She has been heard on the show saying that she has bought issues of Vogue magazine instead of food and loves shoes. Her fun style of mixing today’s fashions with vintage fashions of yesteryear makes her style a desirable one to copy.

Here are some of the ways you can emulate this popular television character:

•    Dresses: When wearing dresses you should go for the type that are strapless and look like they may have come out of the seventies. Bradshaw is frequently seen in these types of dresses on the show and will frequently accentuate her dresses with a light jacket or sweater. One of her funkier looks on the show saw her wearing a longer trench coat and multicolored leggings to go with one of her typical short dresses. So really you can go wild here, just try your best to mix some of yesterday’s fashion with some of today’s.
•    Pants: Though not too often, there are times that Bradshaw is on the show wearing a pair of pants. These pants are khaki style pants and are typically form fitting. Be sure not to go too tight as Bradshaw never reveals too much, at least not on her lower half.
•    Shirts: When wearing pants, Bradshaw will top them off with a nice vintage style white button down shirt that usually has some sort of frilly design. This can be accessorized in a number of different ways according to how your mood for that day is.
•    Shoes: Once again, Bradshaw is a self-proclaimed shopping addict and has said on the show that she has bought over $40,000 in shoes in her lifetime. The types of shoes that she wears on the show are indeed some of the most expensive on the market and can range in price from $350 to $500 per pair. But the point here is that you can wear what you want when it comes to shoes. Again you can have fun mixing and matching according to your mood and you do not have to feel like you have to spend an arm and a leg on your shoes.
•    Accessories: Bradshaw approaches her accessorizing much the same way she does every other aspect of her dress; by having fun. Sometimes she will be seen wearing a scarf and other times a hat will fit the bill. As for jeweler she is on the show going all out at times and being very conservative at others.
•    Hair and Make-up: Bradshaw gives ample attention in both areas and to totally emulate her look, you should too. Her hair is wavy and you can emulate this with a curling iron. Her make-up is put on rather heavily but she never goes with bright or dark colors.

Again, have fun mixing and matching fashion from different eras and when you feel that you are all set, hit the city for a night out with the girls.