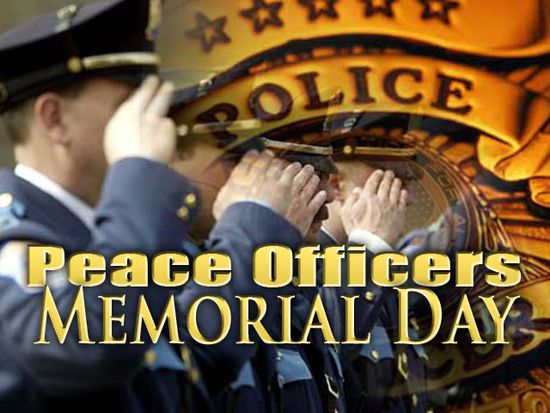 Being a policeman isn’t easy, and these days, many policemen are underappreciated for the risks and difficulties they face every day on the job. The rise of gangs, drugs and other illegal activities over the years has put policemen in the line of fire from just about every direction. Every year, policemen are killed during the line of duty, and it’s up to all Americans to honor their memories and sacrifices, as they have given their all to protect common citizens from the reckless and oftentimes cruel intent of others.

Peace Officers Memorial Day is observed on May 15th of every year, since its inception in 1961. It’s meant to be a day when all law enforcement personnel are recognized and honored for their dedication to duty, whether they belong to the local police department, or the Texas Rangers. The day recognizes those who serve on the streets and those who serve behind their desks, as well as detectives, crime scene technicians and prison guards. It’s a day to honor the dedication of those who wear a badge in some capacity, and to reflect on their duty to protect the innocent from the vagaries of human cruelty and thoughtlessness.

For most Americans, recognition and observance of the day is done privately, as it’s not a traditional holiday where people get the day off. Local law enforcement facilities don’t take the day off, as police officers are always on duty, but local communities often hold platforms where speeches and memorials to fallen peace officers are offered. The official observance of the day is held in Washington D.C., where the Law Enforcement Officers Memorial wall serves to remind all Americans of the ultimate price paid by many peace officers who gave their lives in the line of duty. The wall contains the name of over 15,000 law enforcement officers who have been killed while performing their duty to protect the lives of innocent men, women and children. The terrorist attacks on New York City’s world trade centers in 2001 caused citizens around the country to more fully appreciate the dedication and sacrifices that many law enforcement officers endured as they entered the burning and collapsing buildings along with fire department personnel in an effort to save as many lives as possible.

Peace Officers Memorial Day is part of a weeklong recognition of law enforcement personnel’s service to communities throughout the nation that is held every May from the 12th to the 18th. Flags are flown at half-staff to honor those who have given their all to protect the rights, property and lives of all citizens, regardless of social status or race. In many communities, groups of school children of all ages visit their local police and sheriff’s departments, offering personally made thank you cards and posters, banners and signs to those who serve to protect them.

In 2003, President George W. Bush created a USA Freedom Corps that enables citizen volunteers to help buttress the efforts of local law enforcement facilities and to help in creating Crime Watch neighborhoods within their communities. Citizens and police officers work together to lower crime rates and prevent a rise in drug or gang activity within their city limits and town borders. Volunteers in local police organizations number in the tens of thousands in communities around the United States. President Bush also proclaimed that May 15th would continue to be recognized and honored as Peace Officers Memorial Day and that the week in which it fell as ‘Police Week’. The support of local citizens and organizations in every community makes a big difference for law enforcement personnel, who often find themselves unappreciated, underpaid and understaffed. There are few job or career positions that are as dangerous as law enforcement work. Police officers and their counterparts put their lives on the line every day when they arrive to work.

It’s up to American citizens to recognize and honor the dedication of such officers, and to provide support. The pursuit of law and order has been a need since the beginning of time, and Americans are fortunate that every generation provides strong and determined individuals who are willing to risk their lives to protect common citizens from acts of violence.