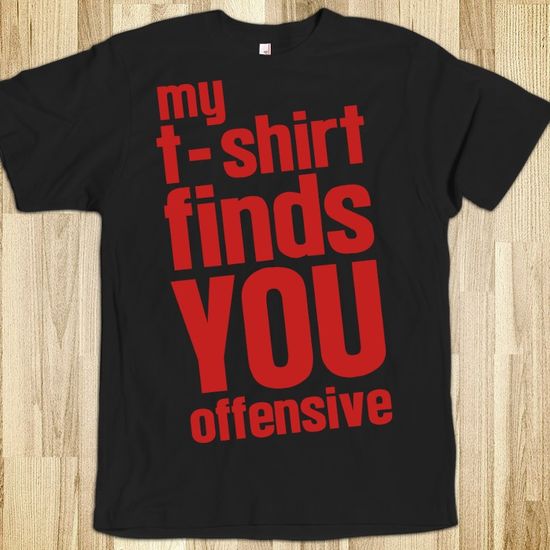 Remember FCUK and how your jaw dropped seeing it emblazoned defiantly across the chest of customized t-shirts? Now that really hurt the sensibilities of most, despite the fact that the offensive word wasn’t even spelled right. However, you’d be surprised to know that the success of Trevor Beattie FCUK campaign has been phenomenal, since the time it was launched in 1997. The bad news is there are always more ways to offend than this! Welcome to the shocking world of offensive customized t-shirts that continue to offend, outrage, provoke and delight us!

Let’s face it. The t-shirts flaunting brands and logos are ‘very much not the market anymore’. In other words, they’re no longer as fashionable. The billboard space that a t-shirt provides is simply too tempting to be wasted on them. So, the customized t-shirts have turned funny, trendy and cute. But, what’s slowly and steadily becoming the norm are hard hitting messages that aim to poke fun and offend!

Seen this one? ‘Wong Brothers Laundry Service – Two Wongs Can Make It White’. This tee depicts two smiling caricatured faces with slanted eyes and conical hats. Or another one, portraying a man pulling a rickshaw that says ‘Rick Shaw’s Hoagies and Grinders – Order by the foot. Good meat. Quick feet.’ Cute isn’t it? But, it didn’t sound that to hundreds of Asians whose cries of racism and accusations of misguided attempts at humor drove Abercrombie & Fitch to recall these twenty-five bucks t-shirts.

It’s not only racism that’s the most favored theme of offensive t-shirts; it can be anything under the sun. When a San Diego area high school student wore a t-shirt that proclaimed ‘Be ashamed, our school embraced what God has condemned’ on the front and ‘Homosexuality is shameful’ on the back, it went to the US 9th Circuit Court of Appeals. The Court, in a 2-1 decision, ruled that the t-shirt was ‘injurious to gay and lesbian students and interfered with their right to learn’. It ‘collides with the rights of other students in the most fundamental way’.

And what’d you say to the customized t-shirts for women that had these profound words printed right across the chest – ‘Who needs brains when you have these?’ or ‘I had a nightmare I was a brunette’?

Your very own offensive t-shirts

Before you think up a real stinker of a slogan for your t-shirt, better know the legal angle.
Since, t-shirts are the ones that are used to perpetuate and feed hate crimes through intentionally insulting campaigns; they do come under the preview of the law. The law forbids wearing or possessing items depicting or implying racial hatred or prejudice or other offensive and demeaning matter. However, this is always weighed against the provisions of free speech.

So, if you’re contemplating an offensive t-shirt you’re certainly treading a fine line. But, if you’re certain your slogan is not as blatant as ‘Fuck Duke’ worn by University of Maryland students for a basketball match up against Duke, you can go right ahead. There are a variety of colors, materials and t-shirt designs to choose from. You can create your very own tee from a dollar to ten dollars and sell it anywhere from five to forty-five dollars. The good news is there are companies who’d produce them for you. All you need to do is give your master design and the rest is taken care of by them. They’ll even distribute them under your brand. So, what more can you ask for?

Customized t-shirts already have a captive audience; all you need to do is to display your message in an ‘appropriately offensive manner’!