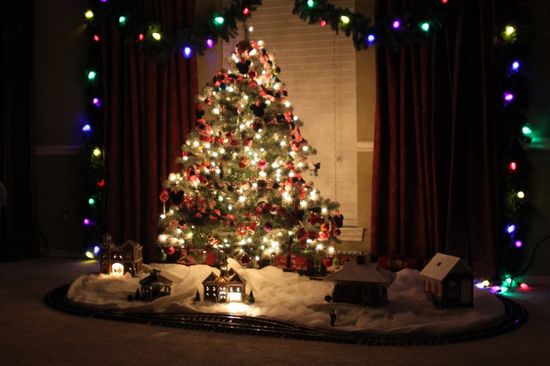 The Joys of Christmas

Christmas is celebrated, or at least recognized, in every country in the world. In America, Christmas is a special time, for family, for faith, and for traditions that have been passed down through families for generations. Christmas is many things to many people, whether it’s attending church services celebrating the birth of Jesus Christ, or reflecting on the end of one year and the hopes and dreams that come attached to the next, or the joy of waiting for Santa Claus and his reindeer to land on the roof during the wee hours of Christmas morning.

While no historians have ever been able to decide exactly what date the baby Jesus was born, December 25th has been set aside to celebrate His birthday in America, and around much of the world, since at least the beginning of the third century. In the 11th century, England celebrated the day, which they called Cristes Maesse, while the Dutch called it Kerst-misse and the Germans coined it Weihnachtsfest. The customs of many Christmas traditions can be traced back to the ancient Druids, such as the use of mistletoe and holly, which used to be a symbol of hope and peace. Greenery, both living or fake, is often placed through homes and came from the belief that trees and plants would bloom around Christmas as a sign of joy surrounding the birth of Christ. It has become a custom for anyone found standing under a sprig of mistletoe to be kissed. The origins of the Christmas tree came from ancient Egypt, though the first documented use of a Christmas tree was in Germany in 1605, and some give credit to Martin Luther, who led the Great Reformation of the church, as being the first to cut down an evergreen tree and take it home for his children to decorate. The custom made its way to America in the early 1800’s through German immigrants.

The traditions surrounding Santa Claus came to America through German immigrants as well, and stories of St. Nicholas were passed down through generation after generation. St. Nicholas lived in Germany in the fourth century and was said to be the source of mysterious gifts that appeared in homes every winter, and children began to hang stockings and shoes on fireplace mantels on Christmas Eve in the hope that St. Nicholas would leave them a gift.

However it was Clement Moore, who wrote the poem ‘The Visit of St. Nicholas’ in 1822 that gave vision to the legend. He created the sleigh, the reindeer, and the sound of sleigh bells heralding the arrival of St. Nicholas. The poem, a favorite of people worldwide, is more commonly known today as ‘Twas the Night Before Christmas’. Children throughout America believe in Santa Claus and his sleigh full of gifts. As they grow older, however, they begin to sense their first inklings of doubt, as did one young girl from New York, who wrote to a newspaper editor in 1897. “Dear Editor,” the girl wrote. “I am eight years old. Some of my little friends say there is no Santa Claus. Papa says, ‘If you see it in The Sun, it’s so’. Please tell me the truth, is there a Santa Claus?” The question is signed by Virginia O’Hanlon. Little Virginia’s query and the response by editor Francis Church, “Yes, Virginia, there is a Santa Claus”, is as famous as Moore’s poem and plays and Christmas movies have elaborated on the theme ever since.

Christmas lights and decorations adorn houses and towns, and people smile more often as they venture out to shop for gifts and soak in the holiday cheer. Christmas cards, which first became customary in the United States in the mid 1870’s, wish holiday cheer and greetings to friends and family. Huge Christmas trees are raised, decorated and lit on Christmas Eve in just about every town in America, while community members gather around to pray and sing Christmas carols.

Christmas has been a joyous celebration practiced for centuries, and will continue as long as Christians gather together to celebrate the birth of Jesus Christ and there are children who believe in Santa Claus.