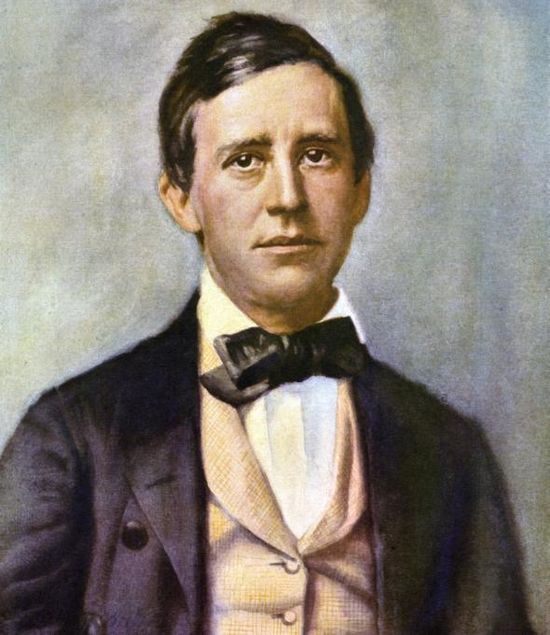 Many Americans have heard his music and enjoyed it, but they don’t know his name. Such tunes as, ‘My Old Kentucky Home’, and ‘Camp Town Races’ and ‘Oh! Susanna’ are etched into the American consciousness, while the author of such lively and distinctly American tunes is not.

Stephen Foster, one of America’s most favored and prolific songwriters, died in 1864. Sad thing was, he was only thirty-seven years old, and if he had lived, it’s hard to say how many other great songs would be considered American favorites. While Foster was a popular songwriter, he was also very poor, and died alone in a tenement in New York City. One of the most well known facts about Stephen Foster is the manner in which he died. Ill and alone in his room, he tried to call for help from a chambermaid, but fell instead. He hit his head on the washbasin that was next to his bed and shattered it, cutting his scalp. Unfortunately, the wound became infected and, without the antibiotics and sterile treatments Americans use today, he succumbed to infection and died. After he died, one of his most popular songs, ‘Beautiful Dreamer’, was published.

Though inducted into the Songwriter’s Hall of Fame in 1970, Stephen Foster, or at least his name, has been largely forgotten by the American public. A Stephen Foster Memorial Day was officially designated every January 13th, to commemorate the anniversary of his death. It is also a time when many older Americans nod with a smile and break into song when Foster’s name is mentioned. Foster’s music has served to uniquely identify the ‘sound’ of American music of the pre World War Two era, and continues to be regarded as some of the finest music that has ever traveled the airways. Foster’s lyrics, appreciating and honoring American customs and attitudes, continue to be a favorite among many listeners around the world.

Stephen Foster is considered to be America’s first composer, and while he didn’t write classical music like Bach or Beethoven, his tunes caused feet to tap and smiles to appear no matter what part of America they were played in. He wrote of Americans and their lives, and about friendship, courting and love. He wrote songs that exemplified the American spirit and gloried in her land.

Today, the Stephen Collins Foster Memorial is a place where all Americans can visit to see some of Stephen Foster’s works, as well as his personal belongings, family records and old photographs. One of Foster’s greatest songs, ‘My Old Kentucky Home’, is Kentucky’s state song, while Florida has made ‘Old Folks at Home’ also known as ‘Swanee River’, their state song.

Stephen Foster’s love for his country and his unique talent will continue to live on throughout memory as long as his tunes and lyrics are heard, by both young and old  generations throughout the country. Today, his day honors his ingenuity, his gift for translating American customs, mores and ideals into lyrical form. In his home state of Pennsylvania and in Kentucky and Florida, or anywhere else his music has touched the soul of a town or location, memorials and gatherings are enjoyed. Foster’s music floats gently on the wind during many of these memorials, and brings smiles to the faces of many.

Stephen Foster is a great American son, one who had an impact on the American way of life. His songs continue to stir hearts today as much as they did over a hundred years ago. Fun, lively tunes accompanied by memory-inducing lyrics are a gift that Stephen Foster enjoyed, and one he passed on to multiple generations.

← How to Dress like a Cowgirl
Showing Pride during Honor America Days! →
Scroll Up