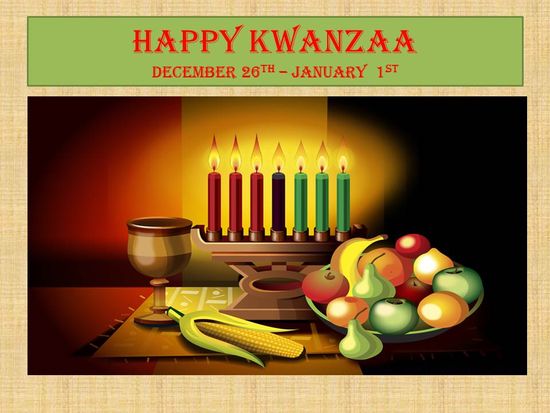 Kwanzaa is a part of American culture these days, celebrating African customs and culture in the United States. The creator of Kwanzaa, Dr. Maulana Karenga, felt that it was extremely important for people of African origin, no matter where they make their home, to remember their roots and traditions. The movement started in the United States, where the majority of people celebrate it.

Kwanzaa is a seven-day celebration that takes place every December 26th through January 1st and serves to reaffirm traditional values of unity, self-determination, collective works and responsibility, cooperative economics, purpose, creativity and faith. The holiday also serves to strengthen African-American communities within the United States, where the celebration is mostly observed, and also reminds African-Americans of their deeply rooted culture. The word itself comes from the African phrase, “matunda ya kwanza”, which means ‘first fruits’. The seven-day holiday is observed because in ancient Africa, the first fruits of the season were celebrated for a seven-day period, but the main reasoning behind making the holiday seven days long was to draw focus to the seven main values of the African people.

Since the earliest celebrations of the holiday celebrated in 1966, the number of African-Americans honoring and recognizing the traditions has grown exponentially. The holiday represents a way for African-Americans to reconnect with their past, their traditional values and a culture that has endured for thousands of years. Africans in every country of the world join together every year to celebrate unity and values that have been passed down from generation to generation. More and more African-Americans join in on Kwanzaa celebrations every year, but you don’t have to be African to enjoy the holiday. Many different races and cultures also observe the holiday, including Latinos, Asians and Native Americans. It’s a way for all peoples and races to touch their roots and remember the traditions and beliefs that have shaped nations for thousands of years. Schools throughout the United States teach children about different cultures throughout the year, but the holiday season is a time when the beliefs and traditions of most different cultures are celebrated. Because Kwanzaa coincides with the traditions and celebrations of the Christmas season, it’s natural to compare the two holidays, though they are not at all similar in purpose or function.

The traditions of Kwanzaa and its message teach a common truth among all nations, and that is one of goodwill toward others. Kwanzaa reaffirms humanity and compassion, unity and strength of values and morals, no matter what a person’s origin of birth. Kwanzaa was created from the cultural roots of Kawaida, which is an African philosophy that most black people face a challenge of their own culture, both historically and of today, and they must learn to blend the two in order to enrich their lives and those to follow. Taking pride in ancestry is not unique to Africans, but to every race within the United States. While Americans are just that, their backgrounds may be Chinese, African, Spanish, Greek or Indian. The lessons of Kwanzaa are that roots are an important and vital component of any race, and that each race must be able to accept and learn from those traditions, whether they are hundreds of years old or thousands.

Schools throughout the country make sure that children today learn about Kwanzaa, and incorporate instruction about African culture and history through poems, songs and written works in order to teach all people, not just Africans, to appreciate different cultures and traditions. America continues to be the melting pot of the world, and borders are shrinking every year. Kwanzaa, while primarily an African-American holiday, nevertheless addresses key issues for all Americans: that sense of self comes from our ancestors, no matter where they come from. Traditions and values are to be honored and remembered at all costs. Kwanzaa enables African Americans to do just that.