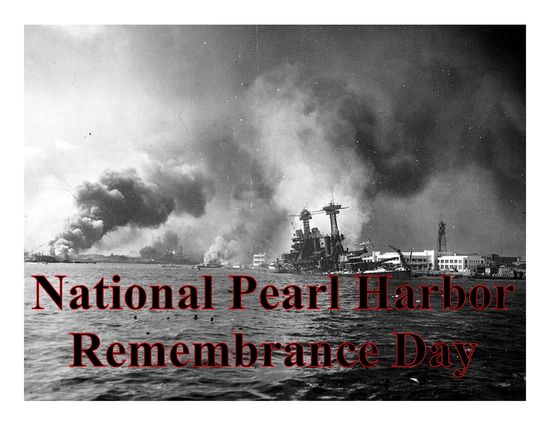 Sixty-five years ago this year, Japanese aircraft attacked the United States of American at Pearl Harbor. It has truly been, as then President Roosevelt intoned, a day that has lived in infamy for over six decades. The only event that even comes close is the terrorist attack on the World Trade Centers in 2001.

National Pearl Harbor Remembrance Day is a day to remember what it is to be an American. We must always remember and honor our dead, those who have given the greatest sacrifice to serve our country. On that very dark day in American history, much of the Pacific Fleet was destroyed. Five battleships were sunk that day, including the U.S.S. Arizona, whose ruins can still be seen today at the Pearl Harbor Memorial in Hawaii. In addition, three cruisers were damaged, and an additional three destroyers were sunk. Over three thousand military servicemen and support members lost their lives and almost one hundred Army aircraft were also damaged or totally destroyed. That morning of December 7th, 1941, marked the first national military disaster that had ever struck the United States. It is, as President Franklin Roosevelt declared, “A day that will live in infamy.”

National Pearl Harbor Remembrance Day is a day in which Americans hang flags from businesses and homes in honor of those who lost their lives that early Sunday morning in what was known as paradise. It’s a day when Americans across the country stiffen their backs and savor the wave of patriotism and love of country that rises to the surface at the thought of anyone, anywhere, daring to attack the United States of America. For Americans, this legacy began years before the first shots were fired in Lexington and Concord. Do we ever stop to think about and appreciate how difficult it must have been for our founding fathers and their peers to take up a fight with the most powerful nation in the world? Yet they did. They felt strongly enough to fight for what they believed in, freedom and democracy, to risk everything, even their lives, in the process.

Across America, children and adults learn about that dreadful day. They watch documentaries on television, hear the voice of President Roosevelt as he responded to the attack on radio, and read about accounts of heroism and loss from those who lived through the attack. The attack propelled America into the Second World War, another dark period of time in American history, but one that found this nation again uniting together despite petty differences such as race, beliefs or social environments. It was a time that brought all Americans together, sacrificing as one for the good of all.

Today, not only those who survived it remember Pearl Harbor Day, but also the generations that have followed. Those who don’t know anything about it, learn about the attack on that day. Veterans’ organizations flock to Hawaii to place wreaths or flowers at the site of the attack, and such services are televised throughout the county. The President of the United States gives a speech at the Memorial, one that ensures that the memory and sacrifices made by the men of the U.S.S. Arizona, the U.S.S. Nevada, the U.S.S. California and others, lives on.

Sacrifice is not something to be taken lightly – to be thought about for a minute and then forgotten. Remember also, that many people have sacrificed that don’t wear a military uniform. They wear jeans or skirts, and come in all ages and colors. They may wear rings in their lips, sport purple hair, or wear three-piece business suits and ties. They may be old women or teenage boys. It doesn’t really matter. They’re all Americans.

Americans have a duty to uphold and honor the legacy of our ancestors. The best way for most Americans to do that is to remember. Never forget those that walked before us and always strive to live up to and represent what America stands for: freedom.