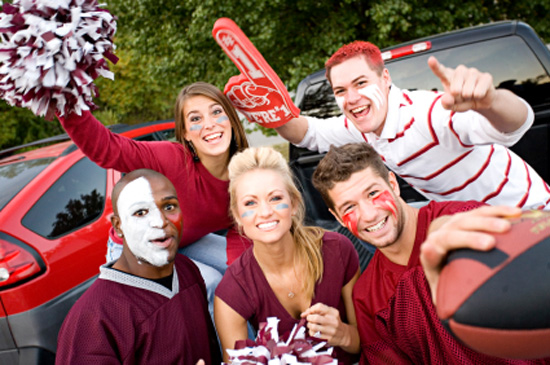 It happens every Sunday from September through January. Men are glued to their TV sets while their wives complain; often misunderstanding the joy their husbands derive from the drama that unfolds on the screen. Why don’t women partake in their husband’s exuberance for football? Most say they just don’t understand the game, don’t see the point, and believe their men should be doing something else with their time. Men dream of a wife that will bond with them through football, as this usually means they’ll get to watch more of it.

There have been a lot of ways that men have tried to get their uninterested wives to like football. The most common approach is reminding her of the time they’re spending together while watching the games. Recently men have come up with a different strategy. Knowing that women like to dress and shop, men believe that if their wives dress the part they’ll eventually feel the part. So buying her some team merchandise, they believe, might be the way to get started.

The first step is where to go to shop? Women are naturally unlikely to shop at places where team jerseys are sold. Macy’s and the GAP aren’t going to sell Pittsburgh Steelers team paraphernalia. So accompany your wife to a local sports clothing store. This will be unfamiliar territory for her so have patience.

What will she need to wear so that she won’t embarrass you in front of your fellow fans?

1) Jersey. This is probably the most critical piece of clothing. It’s a representation of your fan-dom. Keep it simple. Purchase a jersey that only has the team’s name on it. In other words, if possible, avoid player names or numbers. Your wife won’t feel a connection to a player she doesn’t know anyway. Names can also be controversial, particularly if the player in question has had legal issues. It won’t help your cause if drunken fans yell at your wife if she has the name Vick on the back of her jersey.

2) Shoes. Sneakers are the name of the game. Go with name brands like Nike that she’ll recognize. Under no circumstances are boots or heels allowed.

3) Jeans. This is where you can give your wife some leeway of choice. Let her pick the jeans that she feels will best match the jersey colors she’s purchased. She’ll feel a sense of involvement and you can even let her shop for the jeans at the GAP.

4) Accessories. These include gloves or mittens and a scarf. The scarf can be a team-color scarf. The mittens just must be warm if you plan on going to the games in the stadium in winter.

What not to wear? This is simple. A wife in the beginning stages of dressing like a football fan should avoid face paint or wigs. In the future she can sparingly decorate herself if she becomes more of a fan.

Basically, your wife will like the idea of dressing with you in support of your team. She’ll be happy you’ve thought of her and will reward you with unlimited TV time watching the games. And if you’ve done your job she’ll even watch with you.