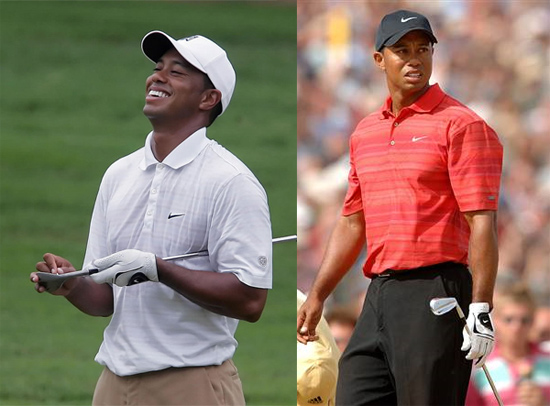 In the world of golf there is no name that is more recognizable than that of Tiger Woods. He seems to win every time he plays and when Woods is playing in a tournament the rest of the field is usually competing for second place. Woods is also a smashing success in the business world and brings in millions of dollars every year in endorsements alone. So successful is woods that men everywhere are using the golf clubs he uses, using the golf balls he uses, and of course dressing like him too.

Tiger is not that hard to mimic when it comes to the way he dresses. When you think about looking like Woods you really only have to think about two things; red and black. You too can look like Tiger Woods by following these simple procedures:

•    Shirts: Unless it is cold outside you will always find Woods wearing a short sleeved shirt. Believe it or not they are not always collared either. Woods has made famous a type of ‘collarless’ golf shirt that is made of a special climate controlled material and what was once a no, no on the golf course is now widely accepted. When you choose your shirts, always go for red and black as this is what woods wears about 85 percent of the time. To really nail Woods, be sure that your shirts are Nike brand as that is Woods’ biggest sponsor and therefore that is all he sports.
•    Pants: If Woods ever wears shorts, he certainly doesn’t do so on the golf course. He can always be found wearing a dark colored pair of trousers that are usually pleated and cuffed. He tops those off with a nice black belt and that is all there is to the underside of Tiger Woods.
•    Hat: Woods is often seen on and off the golf course wearing one of his two trademark hats. He is either wearing his Nike ‘Swoosh’ hat or his Tiger Woods hat that is distinguished with the TW on the front. His TW hat is almost always black and his Nike hat is usually either black or red.
•    Accessories: For all the money the guy has made, he is simply not a flashy guy. Off the golf course he wears a pretty nice watch, but that is it as far as jewelry goes. On the golf course the only accessories you will find Woods dawning is his customary white glove on his left hand and maybe a sweater vest from time to time.
•    Hair: Tigers hair is always short and trim. The only variation Woods allows himself is an occasional gote. If you want to complete the Tiger look you will have to get your hair cut short and keep it very prim and proper.

All that is left is for you to practice your golf every day for about 12 hours per day and after 20 years or so your golf game may match Tiger’s, but probably not. Oh well, at least you can look like the superstar.