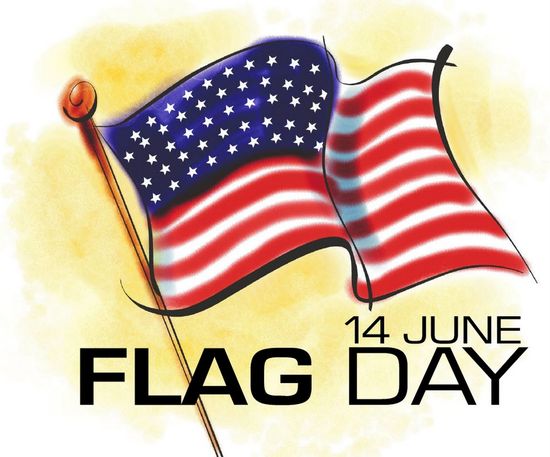 The observance of Flag Day on every June 14th has been a tradition in the United States of America since 1777, when the first Continental Congress passed a resolution in Philadelphia that stated, “The flag of the United States shall be of thirteen stripes of alternate red and white, with a union of thirteen stars of white in a blue field, representing the new constellation.”

The stars were meant to represent a new constellation that had risen in the West, its idea taken from the constellation of Lyra, which signifies harmony. The blue was a color that symbolized resistance to oppression and the circled stars represented the idea of unending eternity. Of course, the thirteen stars designated each of the original thirteen colonies, and there are fifty in the field today, representing every state within America. The red in the flag represents defiance and daring, the white means purity. The first American flag was carried into battle during the Battle of Brandywine on September 11, 1777, made by a woman named Betsy Ross at George Washington’s request.

The first official observance of the new flag of the United States of America didn’t occur until 1889, when a school principal in New York city decided the anniversary called for patriotic activities, and from that day on the Department of Education decided to have June 14th observed in all public schools. Thereafter, the Superintendent of Public Schools provided for the celebrations of both Lincoln and Washington’s birthdays, Memorial Day and Flag Day to be officially observed in schools throughout the nation. Early on, a special flag raising ceremony was accompanied by the singing of patriotic songs. The idea caught on. By 1897, the Governor of New York ordered a proclamation that all government buildings would fly the flag on June 14th, making it the first non-school event that quickly took the country by storm. Soon, most houses and buildings also flew the American flag every flag day, and citizens lined the streets with flags as well.

On Flag Day in 1917, President Woodrow Wilson made a speech that buttressed his decision to declare war on Germany, propelling the country into the First World War. In his speech, he said, “We meet to celebrate Flag Day because this flag which we honor and under which we serve is the emblem of our unity, our power, our thought and purpose as a nation.”

Flag Day has been celebrated every year since, and while it was never officially declared a national holiday, it is honored and observed by millions of Americans every year. The day is also celebrated with patriotic ceremonies in schools throughout the country, with singing, plays and recitation of famous speeches from ancestors and contemporaries alike. Every year on Flag Day, a ceremony is held in the Betsy Ross House in Philadelphia, and the Patriotic Order of the Sons of America place a wreath on her grave in Mount Moriah Cemetery in that same city. Boy Scout and Girl Scout troops across the nation celebrate the day with special events and exercises that perpetuate the honor of the American flag, and many Boy Scout troops take part in ceremonies that retire old flags in dignity and replace them with new ones.

Since that first flag was sewn, billions have followed, and while the design of the American flag has undergone a few changes, mainly in the addition of stars as new states were added to the union, the colors remain true, as do their meaning. The American flag represents courage, freedom and democracy throughout the world, and is recognized instantly by foreign countries and citizens. Men and women continue to defend the American flag, sometimes with their lives, and Americans continue to honor both the flag and the sacrifices made to represent it.