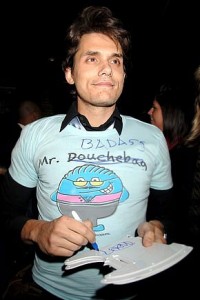 We all love free t-shirts but there are some free t-shirts that you just may not want to accept. A fan gave singer John Mayer a t-shirt with the phrase Mr. Douchebag and a funny round blue in bright colors below. Despite the weird t-shirt gift, Mayer put on the shirt and used his autograph pen to cross out the word “douchebag” and wrote “badass” right above to make it say “Mr. Badass”.

Personally I don’t think crossing out “Douchebag” and writing “badass” really makes you a badass but at least he is willing to have fun. The shirt is a play on the Little Miss series by Junk Food Clothing.

If you are brave enough you can deface your own Mr. Douchebag shirt from David & Goliath

Via: US Weekly & Dlisted