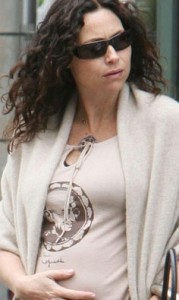 The 6 month pregnant actress Minnie Driver was spotted in London to promote her her album ‘Seastories’ wearing a light brown maternity t-shirt with an image of Ghandi. It is hard not to like a man who believed in truth and resistance to evil through active non-violent resistance.

Ghandi has inspired movements for civil rights and freedom and has been a symbol of peace around the world. If you need a refresher on Ghandi check out MjGandhi.org, or Wikipedia. Via Pacific Coast Online