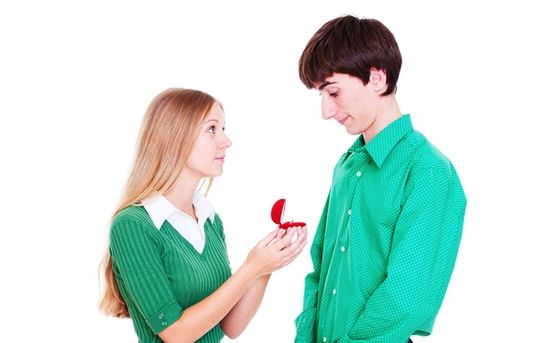 There’s nothing more fun than being able to turn the tables on traditions, and one of the most popular these days is the opportunity to turn things upside down on Sadie Hawkins Day.

Sadie Hawkins Day is perhaps the only holiday that has ever been created as the result of a comic strip, but it’s one that is enjoyed in America every November 9th and looked forward to by many all year long. For on Sadie Hawkins Day, girls get the upper hand when it comes to dating and matchmaking. In the years between the late 1930’s and the late 20th century, it was up to the male species to ask a girl out on a date. Not long ago, it would have been unheard of, and considered quite forward, for a girl to do any asking, but not with the advent of Sadie Hawkins Day.

Created in 1938 by cartoonist Alfred Caplin in the national beloved comic strip of the day, Li’l Abner, the introduction of  “the homeliest gal in all them hills”, Sadie Hawkins, was allowed to pursue any unattached man in the town of Dogpatch with the sole purpose of matrimony. Actually, Sadie was the homely, spinsterish, thirty-five year old daughter of a man who, in desperation, asked for all bachelors in Dogpatch to gather early one morning in town. He then declared that whoever his daughter managed to literally hunt down and capture, and dragged to the finish line at the end of the day, would be required to marry her. The poor father couldn’t bear the thought of his daughter remaining unmarried a minute longer and said, “When ah fires my gun, all o’ yo’ start a-running! When ah fires again – after givin’ yo’ a fair start – Sadie starts a runnin’. Th’ one she ketches’ll be her husband.”

Well, other town spinsters thought it was a grand idea and made the day an annual event, without the permission or acceptance of the town’s bachelors, who were nevertheless unable to prevent such an occasion from taking place.

Today, Sadie Hawkins day is celebrated in schools across America, a day when shy or bold girls can go up to their crushes or intendeds and ask them to the yearly Sadie Hawkins Dance. The holiday took off in 1939 with reports that “On Sadie Hawkins Day, Girls Chase Boys in 201 Colleges!” Meant in good fun, it is nevertheless a chance for girls and women everywhere to make their intentions plain to the gender that is sometimes known as a little dense when it comes to picking up on hints and intentions. Couples attend Sadie Hawkins dances around the United States dressed in farming clothes such as overalls, jeans, flannel shirts and straw hats to honor and commemorate the first, though fictional, Sadie. The event is also known among kids of all ages as WPA, or ‘Women Pay All’. This time, it’s the women who foot the bill for dinner, dance tickets and other entertainments offered at Sadie Hawkins’ dances in middle and high schools, as well as colleges and universities in every state around the country.

The custom of Sadie Hawkins Day, though begun as a simple cartoon strip, took off like a rocket in the psyche of America’s youth, and is a fun and wholesome way to celebrate an opportunity that was heretofore considered improper or forward for a girl to bring up, let alone discuss with the opposite sex. Little did cartoonist Caplin realize what he started, but to this day, Sadie Hawkins Day is a traditional part of school life, one that is enjoyed and celebrated by thousands of young women around the country. In many colleges around the country, an annual ‘Dogpatch Ceremony’ is held to commemorate the event and to kick off the ‘bachelor hunt’, attended by men and women of all ages.

The comic strip, Li’l Abner, was created in 1934 and by 1946 had been syndicated in over 500 national newspapers, which earned a whopping two hundred thousand dollars a year for its creator, known these days as Al Capp.

← History of Earth Day
What Is Super Tuesday →
Scroll Up