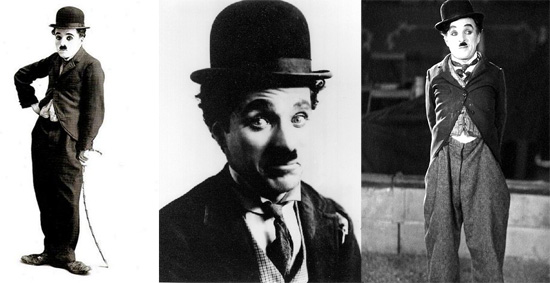 Charlie Chaplin was an English actor born in 1889 who became one of the iconic images of early Hollywood. He started as a theater actor before moving into comedy in his early twenties. In his 65 years in the entertainment industry he wrote, produced and acted in countless films. However, even with all of these accomplishments, Charlie Chaplin was, and still is, best known and always quickly recognized for his tramp character.

Charlie Chaplin created the tramp costume when he was 24 years old for a role in a film. He came up with the costume based on contradictions. He chose big shoes and a tiny hat, baggy pants and a tight jacket. He then added a moustache to make himself look older without extra makeup that would hide his expressions. Dressing like Charlie Chaplin can be easy but it requires the right articles of clothing to pull it off successfully.

The next item for the tramp costume is a black tailcoat. The jacket should be at least fitted if not a bit tight. Under the tailcoat be sure to wear a white shirt, and if it’s a bit wrinkled, all the better to fit the character. If you have a black or gray vest to add under the jacket, that’s a great addition. Next you need a tie, bow tie is preferable but an ascot will do. Now you’re halfway to completing the look.

Once you have the jacket, shirt, tie and hat, the next thing you need to dress like Charlie Chaplin is a baggy pair of trousers. Black is ideal but a dark gray would suffice. Make sure they’re quite oversized, but not too long. Charlie’s pants were loose but they didn’t drag on the ground. Make sure you wear a belt to keep them up!

For your feet you must wear oversized shoes. Charlie Chaplin wore a size 14, so big on him that he had to wear them on the wrong feet just to keep them on. Black dress shoes of some variety would be perfect. Just don’t go overboard with the size, you don’t want to end up tripping over your feet for the sake of a good costume.

Finally, to really create an authentic Charlie Chaplin look, there are two other must-have items. First, you have to add the fake moustache. Charlie used crepe hair but you can use a costume moustache or you can pencil one in with a makeup grease pencil or a simple black eyeliner pencil. Second, you need a cane. Charlie Chaplin carried a bamboo cane, but any simple, single-colored cane will work.

Charlie Chaplin’s tramp character evokes a sense of whimsy and joy. This well-known personality has become a favorite for Halloween and costume occasions. Once you have all of the pieces pulled together, dressing like Charlie Chaplin can be simple and entertaining.