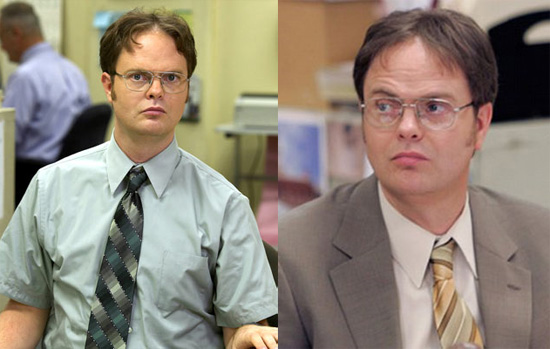 One of the most popular television shows in the last couple of years is The Office. One of the main characters on the show is Dwight Schrute, played by actor Rainn Wilson. Dwight works for the fictional company Dunder Mifflin Paper Company. Though he is one of the salesmen he continually tries to elevate himself to be seen as second-in-command to the office manager, Michael Scott. Dwight acts like a know-it-all, is relatively humorless, wants to be the boss of every one of his peers, and is quite gullible and is therefore often the target of pranks and tricks.

Dwight is one of the most popular characters on the show. His sense of fashion on the show works well to portray his nerdy nature as well as his hunger for authority, which he never truly claims. He has a unique sense of style that is easy and fun to imitate. Dressing like Dwight Schrute just takes a few simple steps.

A great place to shop for Dwight Schrute style clothing is a thrift or second-hand store. Dwight wears drab suits and basic shirts and ties and a thrift store would have just what you need to get his look.

When dressing like Dwight Schrute the first thing to get is a shirt. He prefers geeky short-sleeved, button down variety in colors such as mustard yellow, lime or olive green. To go with the shirt select a tie that doesn’t necessarily match the shirt. Dwight tends to go with mismatched items when he dresses.

The next important item is a suit. Thrift or bargain is the keyword here! Earth tones are big with Dwight as are off colors such as muted beige and gray and strange tones of brown and blue. If the sleeves are too short, that’s ok, that would fit Dwight’s style.

To really get the Dwight Schrute look you have to wear a pair of glasses. They can’t be fancy or with a designer label, they must be simple, preferably with simple frames and sort of an old school oval shape. You cannot get the Dwight look without the glasses!

Finally, when dressing like Dwight Schrute you have to get the hair right. Dwight does not necessarily have a full head of hair, but what he has is quite something! It’s somewhat unruly, looks like it needs to be cut, and is haphazardly parted down the middle. And don’t forget the sideburns. Dwight has sideburns that come down to the bottom of his earlobe. They’re not significantly large, but they are significant to his look. As far as hair goes, make sure you go sans facial hair. Dwight is always clean shaven.

Dwight Schrute, though a fictional character, is a popular guy with a huge following. Dressing like Dwight Schrute can be fun and funny. A few simple and inexpensive thrift store items will have you well on your way to looking the part of the Dunder Mifflin salesman.