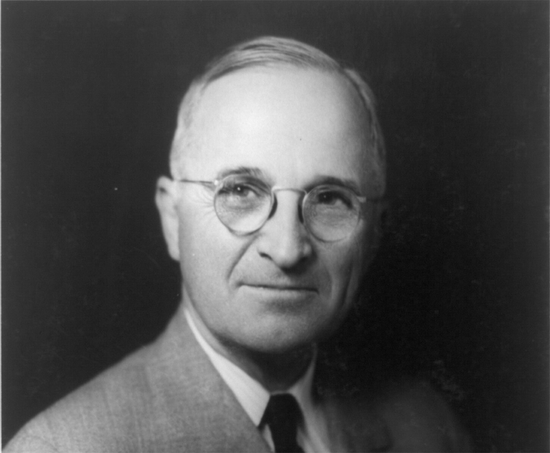 Harry S. Truman was the thirty-third President of the United States. The end of World War Two was a time of great difficulties for the citizens of not only America, but also the world, and his legacies are honored on Truman Day, celebrated every May 8th.

Succeeding to the presidency upon the death of President Franklin Roosevelt in April of 1945, it was President Truman who was burdened with the responsibility of leading lead domestic and global postwar adjustments in civilian and military life, not only in the United States, but in post-war Europe and Japan as well. Truman’s most difficult job as new president was to prevent full-scale nuclear war with other nations, but it was his decision to launch a nuclear attack on Japan in an effort to bring the Second World War to an end. Immediately following the conclusion of the war, the Truman Era began; an era that saw the proliferation of the Cold War, spies, espionage and the threat of global nuclear attacks. Children in schools were taught to drop under their desks in the case of an nuclear attack, and citizens around the country were building bomb shelters in their back yards as the nuclear age threatened the stability and peace of every nation in the world.

Truman himself was a soldier during World War One, and was discharged from service at the end of the war as a major. He married his childhood sweetheart immediately after the conclusion of that war. Of humble origins, Harry S. Truman was a simple man, but one who felt deeply loyal to his country. His presidential administration saw the institution of the United Nations, whose efforts to promote a lasting peace after the devastation of the First and Second World Wars, which left billions of the world’s population without fathers, brothers, uncles or sons. Truman envisioned a peaceful world, one that worked together for the betterment of mankind. The creation of the United Nations will perhaps be remembered as his crowing achievement. The United Nations is still in existence today, a collection of leaders and representatives from nearly every nation around the globe, dedicated to preserving peace and preventing another world war from occurring.

Truman Day is a day set aside for generations of post-war baby boomers to remember the President who brought the country into a new era, a time rife with uncertainty and fear. Immediately after he attained the presidency following the death of President Franklin Roosevelt, Truman uttered a few words to those gathered at a press conference. “Pray for me,” he said. “I mean it.”

Most Americans today remember President Harry Truman as a balding man with round, wire-rimmed glasses, forever immortalized in photographs in history books and lesson plans. President Truman will be long remembered as a simple man, but one who attained the greatest position of power within the United States because of his steadfast loyalty to cause and country, and his firm resolve to bring American soldiers back home after long, bloody years at war. Coming from humble beginnings, Truman’s background somewhat resembles that of another favorite American president, Abraham Lincoln. Son of a farmer, the young Truman worked odd jobs until the advent of the First World War, and upon his release from military service, Truman entered a life in politics.
Truman Day is a day in which all Americans can reflect on the contributions and hardships faced by many presidents in American history, and the legacies that have been left for examples to future generations. A plate on President Harry S. Truman’s desk read, “The buck stops here.” President Truman indeed took responsibility for his actions as president, and while many of those decisions weren’t popular, or easy, he will always be remembered as the president who brought the Second World War to a conclusion.