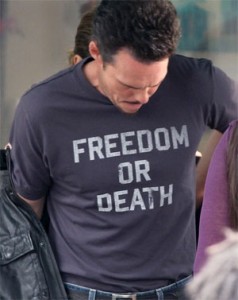 Kevin Dillon was spotted during filming the 5th season of Entourage at the Urth Caffe in West Hollywood on wearing a t-shirt Freedom or Death.

The white “Freedom or Death” text is in a bold font that has a worn vintage appearance. Johnny “Drama” Chase will be wearing this shirt during the 5th season that airs around September of this year.

You can read more about the upcoming Entourage season over at HBO or check out their supply of Entourage t-shirts. They don’t have any Freedom or Death t-shirts but there they do have: Let’s Hug it Out Bitch, Suits Suck, Five Towns, and a Johnny Drama Viking Quest t-shirt. Via: Just Jared

← Plain Orange T-Shirts in Gym Class?
One Celebrity Says Hello on His T-Shirt →
Scroll Up