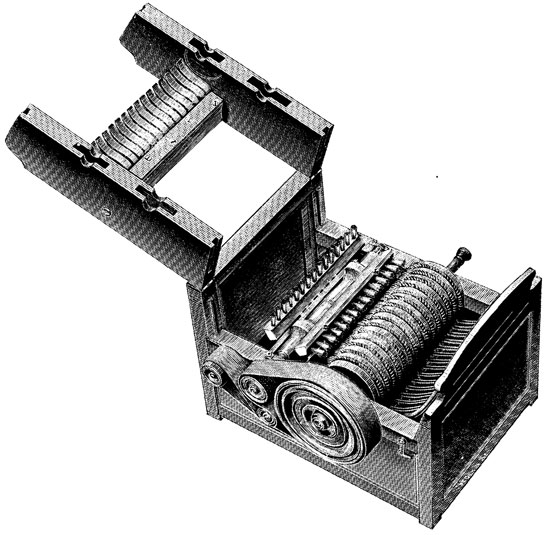 Planters and farmers in the late 1700s were struggling with ways to increase cotton production. Picking cotton was extremely labor intensive. Not only was it difficult, back-breaking work for the laborers, but production was slowed by the fact that it took such a long time to separate by hand the seedpods and the seeds from the cotton. One worker could only produce one pound a day of clean, deseeded cotton. This just wasn’t fast enough to keep up with the production needed.

Having heard of the woes the growers faced, a young Eli Whitney who had recently graduated from Yale University and was tutoring on a Georgia plantation decided he would try his hand at improving the cotton picking process. Eli Whitney was born in Westborough, Massachusetts in 1765. Early on in his life he took a keen interest in machinery.

Whitney’s father owned a woodworking shop. Whitney could often be found here taking apart clocks and pocket watches and then putting them back together again. By the age of fourteen, he had started his own nail and pin making business.

With his strong interest in machinery and mechanics, Eli Whitney began to experiment in 1792 to find a solution to help solve the cotton growers’ problems. In 1793 he arrived at the basic design of the cotton gin. The machine he made features a wooden cylinder with spikes that comb debris out from the cotton fibers. Whitney’s machine could clean 50 pounds of cotton a day. The cotton gin hugely impacted the cotton industry.

It no took hundreds of man hours needed to clean newly picked cotton. The cotton cleaning process could now be fully automated thanks to Eli Whitney’s invention which revolutionized the cotton industry. The Southern states where cotton farming was a primary source of revenue found that the cotton gin made cotton production very profitable.

Due to the increased supply of cotton that was produced, the price of cotton cloth dropped substantially, making it much more affordable to the masses. Prior to the invention of the cotton gin, cotton cloth had been very expensive and thus not available to the masses. The cotton gin changed all this. Manufacturing boomed in the Northeastern United States as factories took the Southern grown cotton and converted it to cloth. Many fortunes were made as a result of the invention of the cotton gin.

Unfortunately for Eli Whitney, his luck at profiting from his invention was not as good. Whitney was unable to get an exclusive patent on his cotton gin until 1802, which was several years after his invention came to be used. By this time many imitators had entered into the marketplace and created their own versions of the cotton gin.