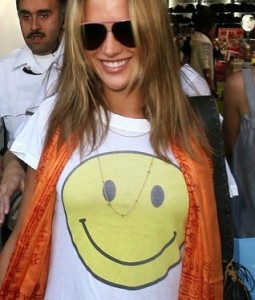 You couldn’t miss the large yellow smiley face design on Brazilian supermodel Alessandro Ambrosio’s t-shirt. The smiley was first used in 1963 by Harvey Bell for an insurance firm. However because Ball did not try to promote or trademark the yellow smiley face it fell into public domain. The smiley face became popular in the early 1970s when the Spain brothers used it on novelty items with phrases like “Have a Happy Day”. The image was finally trademarked in 1971 by Frankin Loufrani and is used in over 100 countries and 25 classes of goods and products. In the 1980s the smiley became a part of acid house dance music culture when it was engraved on ecstasy tablets. Wal-Mart also tried to trademark the smiley face in the United States but encountered a lot of legal conflicts and soon began to phase out the smiley faces and they officially lost the case in March 2008. There are currently more than 1,200 smiley emoticons registered with the Washington Library of Congress. Image from Pacific Coast News and history of the smiley from Wikipedia.