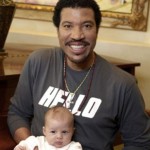 If you have something to say, a t-shirt is a great way to do it. Lionel Richie is a man of words but on his t-shirt he kept it short. Richie was spotted with his new granddaughter wearing a t-shirt with the word “Hello”. Personally I don’t know why a guy who has had five number one singles, eleven completed albums, and received a Grammy would wear a “Hello” shirt but sometimes its best to let our t-shirts do the talking.The Hello is in a large font in white on an charcoal colored long sleeved t-shirt. Via Seriously OMG