A New Zealand filmmaker really wants to attend Film Academy in New York from July to November. Jamie Lawrence came up with the idea to sell advertising on his t-shirt and wear the SAME t-shirt for 126 days. The 126 days is the number of days he will be at the Film Academy. The t-shirt will have the phrase ‘They’ve got my back!’ and sponsors will fill the rest. Jaime will be studying screenwriting and acting for film. While he has only a few sponsors so far he stated “I’m incredibly stoked and so grateful to gain sponsorship from people who not only believe in my dream but also who believe in me. It’s pretty humbling.” 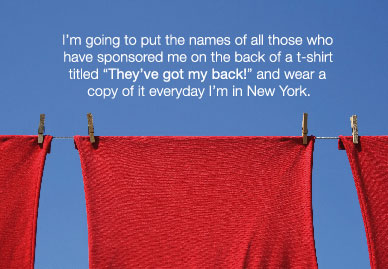 Jaime is hoping to raise $20,000 to make his dream of attending the Film Academy a reality. If you want to support Jaime please visit www.2thebigapple.com.

← The Next Generation of Social T-shirts – Hearts, Hugs, and SMS
15 Celebrities Wearing their Favorite T-Shirts →
Scroll Up