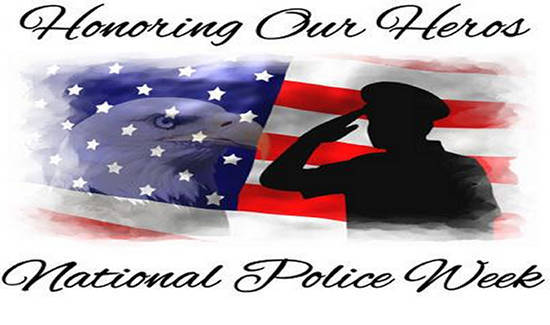 Honoring the Men in Blue during Police Week

Every day, thousands of policemen and women put their lives on the line to protect citizens of the United States of America. The men in blue, as they’re often called, help to ensure that law and order is maintained in every town, city and county, and it doesn’t matter if that county is in ice-bound Alaska or an Everglades swamp in Florida.

Law and order has been an issue that every civilization has had to deal with down through the centuries, and America isn’t any different. Instead of town marshals carrying six-guns, we now have sheriff’s offices and police departments to take care of any legal problem that may occur in a town or on outlying roads and highways. As the population in the United States has grown, so have the needs of police departments everywhere. The dedication to duty and risks that police officers take on a daily basis is recognized and honored during Police Week every year, an event that officially began in 1962 and which is still observed to this day.

President John F. Kennedy officially signed a proclamation in 1962 designating May 15th of every year as Peace Officers Memorial Day, and the week that surrounds it as Police Week. Police Week isn’t only an event for law enforcement personally to honor and observe in our nation’s capital, but one that every citizen in the United States can participate in as well. Every year, thousands of law enforcement personnel from different branches of law enforcement and states converge on Washington D.C. for events that honor those who have sacrificed their lives in the line of duty.

The first nationally recognized Police Officers Memorial service was observed in the early 1980’s. A little over a hundred people attended that event, held in Senate Park in Washington D.C., to honor ninety one police officers who had died in the line of duty. By the 21st century, over three thousand fallen police officers have been memorialized and honored at this same event, which now draws thousands of visitors, family members of the fallen, and law enforcement personnel from around the nation. The day, marked by speeches and memorials, is a somber event, capped by a candlelight vigil.

Police Officer Week also draws attention to the needs of surviving family members of those whose loved ones have been killed in the line of duty, and the event also offers seminars and counseling sessions to answer questions and to provide help and support for those suffering the loss of a police officer from within the family. Attention is also focused on young people, encouraging them to realize that police officers are trained to promote peace and safety among civilians. Whether Americans agree to every rule and statute within their city or county or not, it must be recognized that a police officer is bound to protect the lives of the innocent and rules must be enforced to limit illegal and dangerous activities.

Whether police officers wear undercover clothing, riot gear, bulletproof vests or business suits doesn’t matter. They are all sworn to protect the lives of innocent people who are sometimes at the mercy of criminals who have no regard for law or peace. A police officer, no matter which branch of law enforcement he or she holds, is often expected to deal with dangerous and deadly criminals that would otherwise endanger Americans in their homes, their place of work, and their schools. It is up to Americans everywhere to honor and appreciate the dedication to duty that allows police officers to place their lives on the lines for strangers in order to live up to that oath.

Police Week is a time when everyone, young and old, goes out of their way to say “Thank You” to their men in blue.