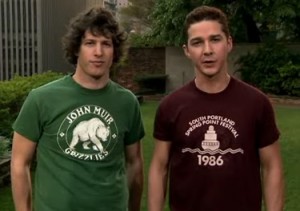 A commercial for Saturday Night Live was aired this week showing Shia LaBeouf and Andy Samberg promoting the next episode of SNL. Andy and Shia are “exploring the roof garden” wearing two retro styled t-shirts. Andy’s is wearing a forest green t-shirt with a bear and the phrase “John Muir Grizzlies”. From what I can tell John Muir School is an elementary school in Berkeley California whose mascot is the Grizzlies. Shia’s is wearing a maroon t-shirt with the “South Portland Spring Point Festival” and 1986. Not sure why they are wearing such random shirts but I guess we will have to wait until Saturday night to find out. Visit NBC to watch the commercial.