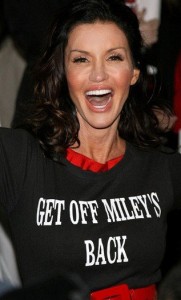 Many celebrities have money and fame but this does not mean they have it easy. Paparazzi, fans, reporters and critics make having a normal life nearly impossible. One of the celebrities who has fell victim to the non-stop media attention is Miley Cyrus. Most recently Miley was critcized for her provocative Vanity Fair photographs and for stealing an LA band’s song.

In response to media attention, the “World’s First Supermodel” Janice Dickinson was spotted wearing a black t-shirt with the phrase “Get off Miley’s Back” in large white letters. The outfit also consisted of a long black shirt and a bright red belt.

While I am not sure that wearing this t-shirt will in fact get the media off Miley’s back I think many might believe such a phrase.